Let me start by saying, it was love at first touch.

The Michael Box Mod featuring the VO Chipset by Asvape.

What a fantastic piece of hardware.

Opening the box, which has some pretty slick looking packaging, the Devil’s Night Edition wows from the first time you see it. The artwork is fantastic, detailed defined. It is printed beautifully with a water-transfer process and is set off with satin gold trim.

Let me say that as a Christian, such dark artwork isn’t usually something that would interest me, but that doesn’t mean that I can’t appreciate excellent artwork when I see it.

Reaching into the box to remove the mod, I was afraid the artwork would make it rough to hold, but to my pleasant surprise it was almost velvety in my hand. It is smooth and almost soft to hold, to the point that I didn’t want to fill one of my tanks on it because I was afraid it would leak.

The mod has the standard on feature of pressing the detailed fire button five time repeatedly, and locking it by pressing it three times repeatedly.

Of course once I got my hands on it, I couldn’t wait to pop one of my Cleito 120 tanks on it. I set it to 95, just like the mod that I was using, and hit it. Dang, I almost ended up on my butt. This puppy packs a punch and hits like a beast. This made the love at first sight just a little bit stronger.

Now, tell me that ain’t something for everyone!

The VO Chipset makes the Bypass mode possible, because it will minimize chipset regulation and allow the power to be provided completely by the battery pack. If the Michael Box Mod featuring the VO Chipset is in Bypass mode, it will get voltage right from the batteries and it will make the mod perform such as an unregulated device. 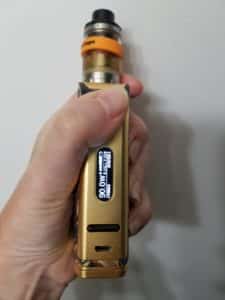 Now, some mods make flipping back and forth between settings difficult, but it’s pretty straight forward with the Michael Box Mod featuring VO Chipset. With simple five clicks of the fire button will bring you to the mode selection menu. From there using the up and down buttons will take the user through the options.

When I popped this artistic beauty out of the box, I had to pause for a moment to appreciate how gorgeous it is. Most mods I look at from a purely functional aspect, or maybe think it’s neat because it lights up in a cool way. But this one is flat out beautiful.

And I managed to throw the two batteries across the floor. There’s a bit of a trick to put the battery panel back on, which is easy to learn but you may or may not care for it. Once I got them in, I adjusted the wattage to what I thought I would like, popped on my tank and hit fire. And almost hit the ground. The tank I use every day, with awesome taste, now had awesome taste and an awesome throat hit.

I played with the settings and while I love having options, I’m a fan of the power mode. I think of it like using a tank over an RDA, there are certain times I like to mix it up and I love having the options, but I’m also good with the basics.

Now, I’ve told you I’m in love with this mod, but I have to say there’s one thing I just flat out don’t care for.

The trim is detailed and goes well with the Devil’s Night Edition art work, but it just is too much for me.

And think about it, most Mods and hardware are silver or black, you don’t see a lot of gold. And I’m good with that. I’m not a big gold person. My Peerless RDA and my pink Smok Baby Beast tank have gold trim that matches up with the Michael Box Mod featuring VO Chipset.

I’m all for having my setup match, and I favor my silver or stainless steel look. But I’m sure the there are some people that would jump at the gold.

The VO Editor software and included USB cord allow you to customize the logo on the 0.96-inch OLED screen¸ which is a neat little feature.

I’ve given this rocking mod kind of a rough start to life. I’m naturally a klutz and items in my hands usually pay the price for that. I have to say that it has held up well so far to my beat up life.

It doesn’t seem to drain my batteries too quickly, which is always a plus. But, I have seemed to be going through more prebuilt disposable coils than normal. I’m not honestly sure if that’s connected to this mod or not, but I wanted to make you aware.

A Google search puts this mod selling anywhere from $70 to $125, a range which makes it a slightly more expensive mod than just a regular old base model.

But, in addition to the features, this mod with the detail and design make it an extremely unique 200W mod.

If you’ve got the budget and are looking for something unique, I suggest you grab one while you can.

A win-win in my book.

The best place to buy the Michael Walking Dead Edition box mod is from Ave40. Want to see how the Michael compares to the competition? Check out our list of the best box mods and also our Asvape brand profile.