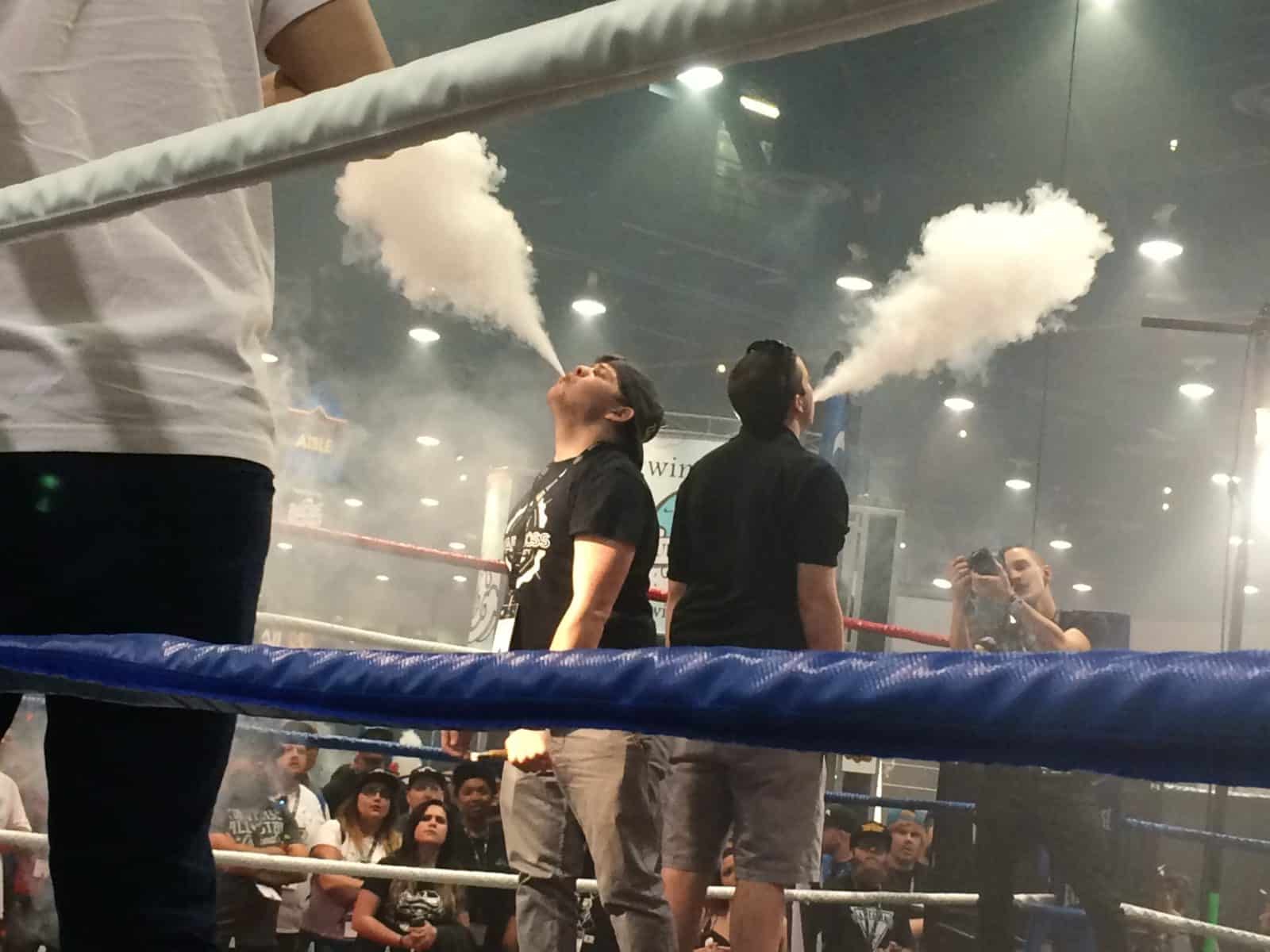 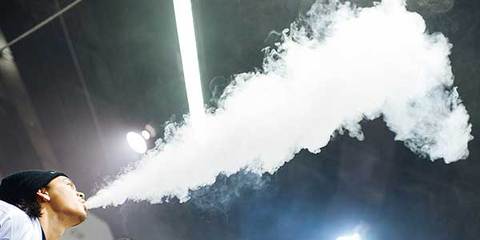 Blowing huge clouds is a goal that many vaping enthusiasts strive to achieve. But what kind of equipment is best?

There are many factors that you’ll have to tweak when figuring out how to blow the biggest clouds, but the main things to consider are air flow, power supply, and conductivity.

When you’re looking for a box mod for cloud chasing, you’ll usually want a high-power mod that takes at least two 18650 batteries. Although there are some single-18650 and some internal battery-powered mods that are good as well.

If you have the money to spare, a high end mod like the ones from Lost Vape would be ideal. The Triade DNA250 and the Therion DNA75C are some of the most well-crafted mods on the planet. Obviously they aren’t within everybody’s price range, but if you can afford one you won’t be disappointed. Here are some mid-range mods that will help you blow clouds almost as well as Lost Vape:

The Kangertech Five 6 AKD Starter Kit is the *ultimate* choice for serious cloud chasers. It is compatible with five (not a typo) 18650 external batteries. If you are *really serious* about chucking some cumulus clouds, you’ll need the raw power that this mod provides. If you’ve never vaped with five 18650 batteries, then you only *thought* you were cloud chasing. This is next level stuff.

The Sigelei Kaos Spectrum is a 230W powerhouse of a box mod. This one manages to give you unprecedented performance specs with a unique design: This thing lights up in a variety of different colors. If you like a flashy box mod to show off that still gives you glorious clouds, this is the one for you.

The Wismec ExoSkeleton is the latest offering from Wismec, one of the leaders in vaping tech. This is one of the more unique looking mods out there, with a cool outer “skeleton” type design. It requires three 18650 batteries for maximum power output, and is capable of firing at up to and including 300W.

The Kangertech KBOX 200 is a powerful little box mod that packs a huge amount of power in a small size. When paired with a sub-ohm capable tank, this thing produces massive clouds at an affordable price.

The Smok H-Priv 220W is a brand new kit that gives you 220W of raw, uncompromising power and temperature control capability in one sleek, stylish box mod. This kit also includes the Micro TFV4 tank for ultimate sub-ohm vaping capability.

The Wismec Predator 228 kit is another great all-in-one starter kit that features a high wattage level. The included Elabo tank also has a childproof lock system, making it a great choice for anyone who has kids or pets. Bonus: This is easily the COOLEST looking mod kit on the market today.

The Smok Alien and Smok Alien Baby kits are proving themselves to be among the most popular starter kits of 2017. Even if you’ve never vaped before, you’ve almost certainly seen one of these kits before. The Alien line of box mods is considered by many to be the go-to for beginners and experienced vapers alike.

The Smok V8 and Smok AIO kits are good choices for people who are looking for more simplicity. They feature an intelligent one-button design, making it ideal for people who aren’t interested in tweaking a bunch of complicated settings but still want to blow huge clouds. The low prices on these two kits are pretty sweet as well.

The Smok G150 is another brand-new starter kit just released in 2017. It features a powerful 150W of raw power, enough to help the included TFV8 Big Baby tank push out some sick, glorious clouds.

And, by popular demand from the comments section, we would be remiss to forget about the RX200 box mod. This is a triple-18650 powerhouse of a mod that is designed to meet the needs of any cloud chaser.

A lot of cloud chasers prefer mechanical mods, but these require extensive knowledge about battery safety to be used effectively. You’ll want a mech mod that has good vent holes as well as excellent connectivity. You can also get good results with regulated mods. Here are some recommended cloud chasing mods (only for *advanced vapers*):

Hell Hound – Made by Wulf Mods, this mechanical box mod is a dual-18650 powerhouse that will work best when paired with the Hell Hound RDA.

The Smoant RABOX is an intelligent mechanical mod that includes a variety of added safety features. If you’re advanced enough to use a mech mod but still a little bit nervous, this is a great entry point.

If you’re cloud chasing, you’ll generally want to be using an RDA.

You can blow big clouds with just about any RDA, but here are some of the ones we recommend:

Lone Wulf (This is the best one we’ve used so far, it comes in a kit combined with the Lone Wulf Mod and RDA.)

Tugboat  This is an American-made RDA that features a really solid 3-post design. You’ll get dual airflow holes and plenty of room to accommodate even the craziest builds.

If you’re more of a fan of regulated box mods, sub ohm tanks are one of the best ways to get your cloud chasing fix.

Wulf Mods Plus This tank is idea for kanthal and nichrome coils, and is one of the easiest ways to blow clouds with a box mod.

Sense Herakles This classic tank is one of the most popular tanks around the world for sub-ohm vaping.

Baijiada Mermaid This is another great choice for sub-ohm vapers, brought to you by the same manufacturer as the Herakles.

The Uwell Crown 2 and the Uwell Crown 3 have been gaining a ton of popularity in 2017 among people who are willing to venture out from the more established brands. Uwell is a much smaller company than some of the titans of the vaping industry, but this small size allows them to really focus on creating phenomenal products. They’ve definitely knocked it out of the park with their Crown series of tanks.

When building coils, you can use a wide variety of different wire sizes. You’ll have to experiment to see which one suits you the best. But the most important thing to consider if you want to blow clouds is surface area and contact between the wire and the wick.

Get spools of wire and pre-wrapped coils here.

You’ll most likely be sub-ohming while cloud chasing, so you’ll need a high quality battery that can handle it. We recommend either Wulf Mods or MXJO batteries for cloud chasing purposes. Make sure that you read up on battery safety before you attempt to cloud chase, because unsafe sub-ohm vaping has led to rare injuries.

You’ll want as much VG as possible. 100% is idea for cloud chasing, but anything over 75% will do the trick. Get e-juice here.

So there you have it! All the gear you need to start cloud chasing in one article! Don’t forget to research battery safety before you attempt to use any of the gear in this article. This article is geared towards vapers who are using mods to vape e-juice. If you’re looking to get started vaping wax, we’d recommend using an e-nail to get the maximum amount of vapor. Read our best choices for e-nails in 2017 here.