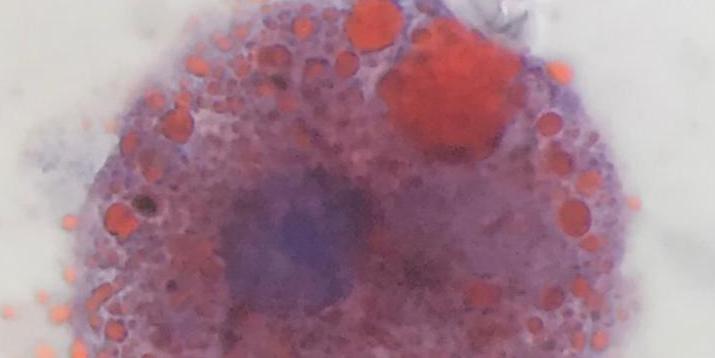 Doctors in Utah treating patients with the mysterious vaping illness have identified a new characteristic of the respiratory illness: lipid-laden macrophages. These large immune cells full of oily droplets are present in the lungs of some patients with the illness that has been emerging across the country.

Macrophages are important to the human immune system, forming specifically in response to a disease process. Their job is to detect and engulf target cells, such as those causing a disease. It appears the macrophages in this case are fighting illness caused by droplets of oil in the lungs. As they to remove the oils, they fill with them.

Finding this sign of the vaping illness may assist treating medical teams in diagnosing patients more quickly. It may also help scientists understand what ultimately is causing the disease—and how to treat it.

“While it is too soon to be sure, these lipid-laden macrophages may turn out to be useful to confirm or rule out this disease,” University of Utah Health critical care pulmonologist and study senior author Scott Aberegg, MD, said in a press release. “They may also be helpful in understanding what is causing this illness.”

Doctors and patients discuss the vaping illness on video here.

When patients present with the vaping illness, their lung scans resemble those of patients with serious bacterial or viral pneumonia. However, when tested for those illnesses the patients show negative results. Thus far, the vaping illness is a kind of diagnosis of exclusion based on symptoms and history.

By September 6, the U of U Health investigators had identified the lipid-laden macrophages in all six University of Utah Hospital cases. The team found the cells in samples from patient lungs, and stained them with Oil-red-O, a dye. The dye highlights the oily droplets in the cells.

“These cells are very distinctive, and we don’t often see them. That made everybody start to think carefully about why they were there. Are they scavenging debris in the lungs that was introduced through vaping?” Aberegg said in the press release.

If they are, and if not all vapers experience symptoms, only some kinds of vaping cause this illness. In New York, for example, officials found vitamin E acetate adulterating cannabis vape products, and these products made patients sick.

The U of U medical team discovered the macrophages after testing a patient for lipoid pneumonia in July. Once they found a marker for this unusual disease, they tested other patients, and found the same marker. Although all patients had the vaping illness and all tested positive for the cells, none had classical lipoid pneumonia.

The Utah team has continued to treat sick patients. As of this writing, they have detected the lipid-laden macrophages in 10 of 10 patients.

The team is not yet sure whether the vaping respiratory illness is its own unique disease, or simply a variation of lipoid pneumonia. Although the diseases share some traits, there are also important differences.

“We need to determine if these cells are specific for the illness or whether they are also seen in vaping patients who are not ill and don’t have symptoms. If they are only seen in patients who get sick, we can begin to make some connections between what we’re seeing in the lipid laden macrophages and whatever components of the vaping oils may be causing this syndrome,” Aberegg said in the press release.