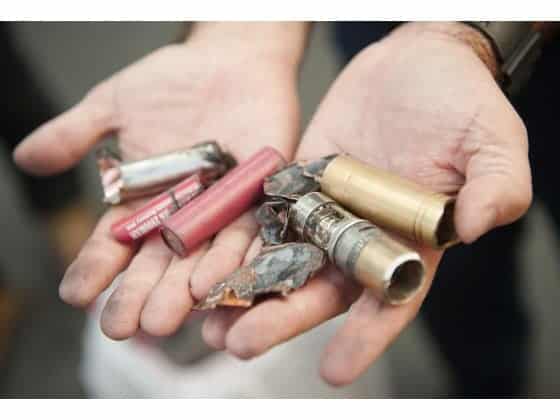 A man in California was vaping a mod in his bed and it exploded, causing flash burns on his face and hands and setting his bed on fire. Parts of the device were found lodged in his ceiling. Here’s a transcript from the 911 call:

Caller: I’m freaking out, I just had an electronic cigarette blow up in my hand.
Operator: Are you burned or what happened?
Caller: I’m burned pretty bad, I’m freaking out.
Operator: Are you having any trouble with your breathing?
Caller: I think I’m having a little bit of anxiety. This thing like blew up in my face and it shot and stuck in my ceiling.

So it seems like the folks over at E-Cigarette-Forum have a discussion going on about this event and it seems like this guy was basically a textbook case on how to vape unsafely. He was using a sub-ohm Atlantis tank with a hybrid, two battery mod. Moreover, he was using two different batteries.

You know how any time you go to a site to buy a sub-ohm tank, there’s a warning about how they should only be used by advanced users who are educated and know what they’re doing? This is why.

For all the retards out there, don’t fucking start sub-ohming unless you know exactly what you’re doing. Things like this are easily preventable as long you do your research and make sure that you’re using the appropriate equipment. Most likely this guy was someone who just wanted to blow “sick cloudz” and didn’t bother doing any research because it’s “too boring”. Don’t be like this guy. There’s too much information out there to have any excuse. He was just plain dumb.

However, by no means excusing his behavior, manufacturers should include detailed instructions with their devices explaining the potential safety hazards. I’m aware that the average noob who wants to blow clouds will not bother to read them, but it will help to cover the manufacturers ass. The fact that most mods don’t come with anything like this is completely irresponsible and short-sighted, since all it does is create situations like this and give credibility to people who want to see vaping banned, which will in the end put them out of business.

What do you think? Was he a dumbass or is it the fault of the manufacturers who don’t give safety information with their mods?