How to Quit Vaping 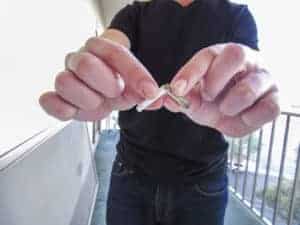 Most people use vaping as a method to quit smoking. Research shows that it is much less harmful than smoking cigarettes and that it is a much more effective method of smoking cessation than other nicotine replacement therapies, such as nicotine gum and patches.

But there may come a time when you finally decide to move on from vaping. A lot of people started vaping with the eventual goal of weaning themselves off of nicotine for good. There’s nothing wrong with that. It’s a normal step in the smoking cessation process and you should be proud of yourself for getting to this point!

The good news is that quitting vaping is much easier than quitting smoking. While most vape juice does contain nicotine; it lacks most of the harmful, addictive substances that traditional cigarettes contain. Although the emergence of nicotine salts in the e-cigarette market (the same type of e-liquid that Juul uses) makes nicotine a little bit more potent, it still shouldn’t be too difficult to finally quit vaping.

If you’re ready to quit, here are some of the best ways to do it.

Taper down your nicotine levels

Gradually weaning yourself off of nicotine is the slowest, but also the best, method of quitting e-cigarettes. You’ll minimize the nicotine withdrawal symptoms, which as anyone who has ever quit smoking can tell you, are very unpleasant.

If you recently quit smoking, you most likely started with a high nicotine e-juice. If you want to quit, you should gradually lower the nicotine level over time. So if you’re vaping at 18mg, switch over to 12mg for a month. Then reduce it to 6mg, then 3mg, working your way down to 0mg e-juice. At that point you are no longer addicted to nicotine and you can stop at any time (obviously the behavioral component of addiction is something you’ll have to overcome, but it’s way easier than overcoming nicotine addiction cold turkey).

When tapering down your nicotine levels, there are a few key things to remember:

Once you get to the point where you’re vaping a zero nicotine juice, quitting will be significantly easier. Of course, you’ll have to overcome the physical addiction, aka the “ritual” involved with vaping. But it’s arguable that the ritual surrounding smoking is much more addictive, and you’ve already overcome that one!

Lower the amount of e-juice that you use

This is similar to tapering down your nicotine levels, but a little more complicated. If you already have a lot of e-juice laying around, there’s no need to throw it away just because it contains a high amount of nicotine. You can simply taper down the amount of juice that you vape, and it’ll have a similar effect. This method requires the greatest amount of self-control. After all, the e-juice is right there. But if you’re disciplined enough, this can be an extremely effective quitting method.

The cool thing is that most modern vape mods include a “puff counter”. This allows you to keep track of how often you’ve been vaping throughout the day. Simply monitor the amount of puffs you’ve been taking for the first couple days. Once you know what your baseline puff count is, set a goal to reduce it. Here’s the method I like to use:

If you’re disciplined enough to follow this method, you’ll be able to quit fairly quickly.

Quitting cold turkey is the most efficient, but also most difficult, method of vaping cessation. Just stop vaping all at once. No tapering your nicotine. Don’t wean yourself off of e-juice. Just stop.

You can make the transition from vaper to non-vaper in an instant. As soon as you make the decision, you’re done. Of course, it’s not quite that simple. You’ll be dealing with some ridiculous withdrawal symptoms. The cravings will be intense. But once you get past the initial misery of nicotine withdrawal, you’ll be good to go.

It definitely takes a certain personality type to quit cold turkey. You most likely know if you’re this type or not. If you are, then go for it. Get over the initial unpleasantness and move on with your life. But if you aren’t, then following the methods listed above should be a huge help. As long as you quit vaping (if that’s your goal), then it doesn’t matter how you do it.

How to quit Juuling

The Juul provides some unique challenges when it comes to quitting. Juul uses nicotine salt pods, a more potent form of the freebase nicotine that is common in most vape juices. Each Juulpod is designed to replicate a pack of cigarettes. If you want to quit the Juul, there are a couple unique steps that you’ll need to take.

Quitting vaping can feel overwhelming and helpless. It doesn’t have to be. A lot of people’s fears surrounding the vaping cessation process revolve around the idea that it is similar to quitting cigarettes. But it isn’t.

The amount of addictive chemicals in vape juice are significantly lower than what you’ll find in a pack of smokes. You can buy e-juice in different nicotine levels. And it’s easier to see how much you’re consuming, so you can self-monitor and stay aware of any changes in your consumption habits.

Stick with the process and you’ll be vape-free in no time at all!