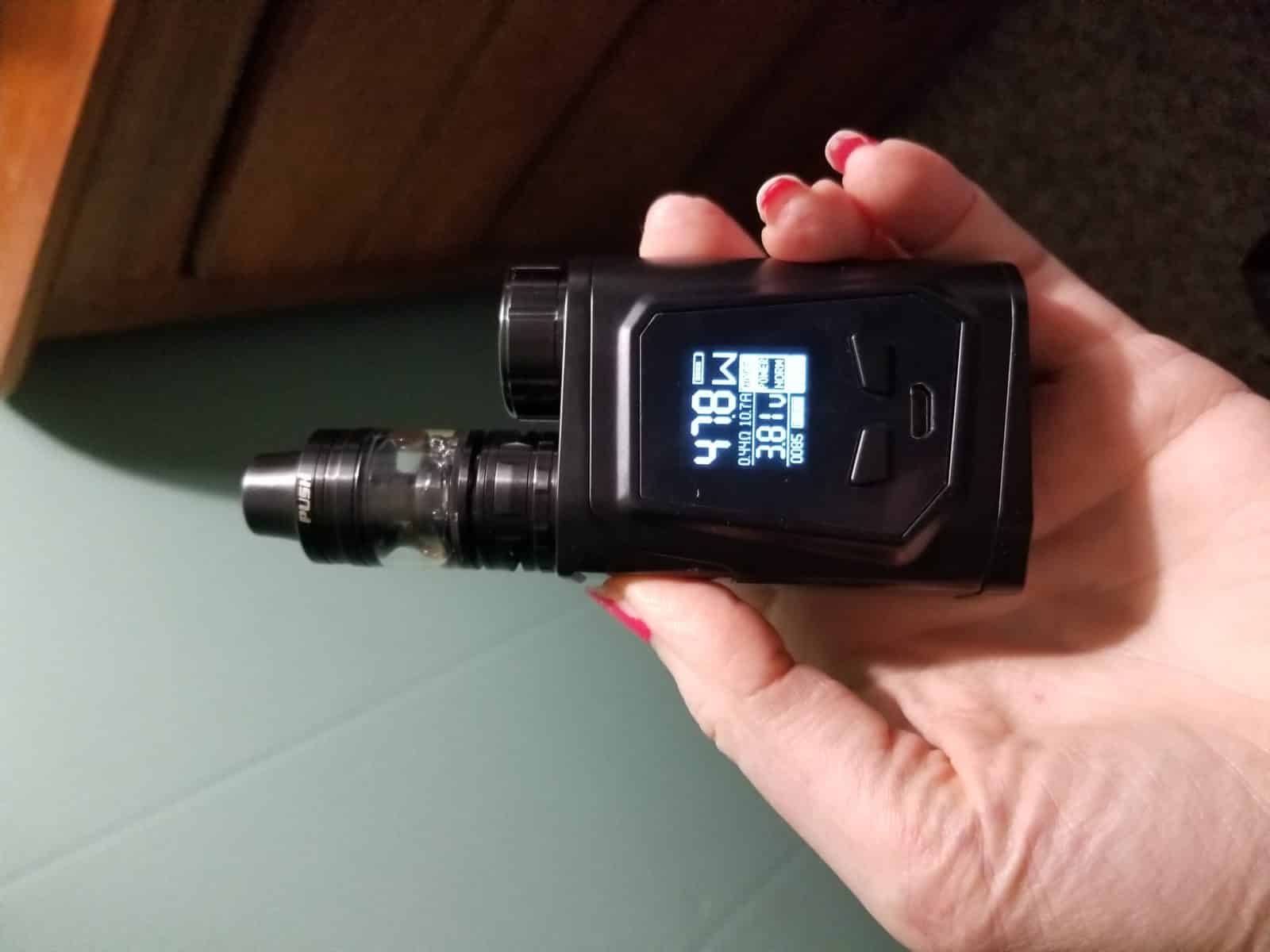 Have you seen this little guy? I say little guy because the iJoy is small and the Captain mini subohm tank included in the kit is just a little thing too, but man was I surprised. Normally I love a mod with a good hand grip, nothing too big but something that you can really get a hold of and something that has just enough weight that you know you have ahold of it.

Also, I have to admit, if I was in the vape shop looking around, I wouldn’t give this little guy a second glance because I usually go for at least a 200 watt mod. The iJoy Capo tops out at 100 watts. It also has a second feature I don’t care for aesthetically. I don’t like vape mods that are designed to have the batteries drop into the top. I’ve just never been a fan of the look.

So, when I opened up the iJoy Capo 100 kit, initially I wasn’t impressed. But, let me tell you that was short lived.

Recent iJoy mods have been moving away from the traditional 18650 used in most mods and require 21700 batteries. I didn’t have an unmarried 21700, so I had to order one, which is always a pain, because vapers are by nature not patient. But, such is life.

If you haven’t used a mod with a 21700 battery, I recommend giving it a shot. Remember when I said that this little guy is a 100 watt mod?

Now, normally I vape around 80 watts, sometimes up to 120, depending on the tank and the coil. I’ve found in the past that 100 watt mods are somewhat lacking in the power department, so I generally steer clear of them, even though it is the range I generally vape in. With this iJoy Capo, I was blown away (of course pun intended) by its power.

As I’ve learned in the past with vaping, it’s always a rule of thumb to start low and work your way up. And, since I had just primed the Captain mini subohm tank, this is exactly how I started using this mod. I started at a measly 30 watts, I mean, heck, I’m usually around 80 to 120 on my daily driver, and usually 30 barely registers a hit for me.

Not on the iJoy Capo 100. On this little bad boy the 30 definitely registered for me! Man, was I pleasantly surprised.

After monkeying around with the settings for a few hits I found that I would generally vape around a 45 on this bad little guy. A combination of the iJoy Capo design on the 21700 battery makes this guy hit and hit hard. This little guy is designed to hit like a dual 18650 with the weight and carry of a single.

Now, I’ll take this every day of the week.

Now, the Captain mini subohm tank only holds 2 ml, which falls into the con category for me but that’s just because I’m a chain vapor and I hate constantly having to refill my tank. Someone who vapes less frequently or doesn’t mind a quick fill up wouldn’t have a problem here.

One major thing in the plus column is the slide-fill of the tank. You just have got to love this. Nothing to remove, nothing to have to wipe off and set down, just give this a little slide and bam, fill her up. I have a couple of other tanks that are designed to be easy to fill and they don’t always live up to this, but the Captain mini lives up to the easy slide to fill.

So, if I have to fill it often, at least they make it dang easy to do it. Again, a major plus.

Now, let’s talk about the iJoy Capo 100 mod. It’s easy to use, with the standard five clicks of the fire button for on and off. It’s got a nice big fire button on the side, so you can’t miss it. And, one of my personal favorite features on any mod is the puff counter, which is nice and easy to ready on the OLED screen. Now, I can’t really say why I like this feature myself, I just think it’s nifty I suppose.

Let’s talk price for a minute.

Not bad in my book for everything you need to get going minus the 21700 battery and the e-juice. You get an easy to use tank and an easy to use mod that hits like a beast.

After using the iJoy Capo 100 kit for a few days I can say that I am willing to overlook the purely aesthetic issues that I didn’t care for. I’m seriously considering making this bad little boy my daily driver. And coming from someone who has as many mods and tanks as I do, that’s saying something.

I was send the iJoy Capo 100 kit in black, which is a good all around color, but is also comes in eight other rocking colors. Users can chose from black, white, purple, yellow, red, green, gold, silver and grey.

And remember, you aren’t limited to the Captain mini subohm tank, many a tank could be paired up with the iJoy Capo 100. This awesome bad boy is designed to support up to a 26 mm tank with no overhang.

Check out our list of the best box mods and the best mod starter kits before you make your decision!