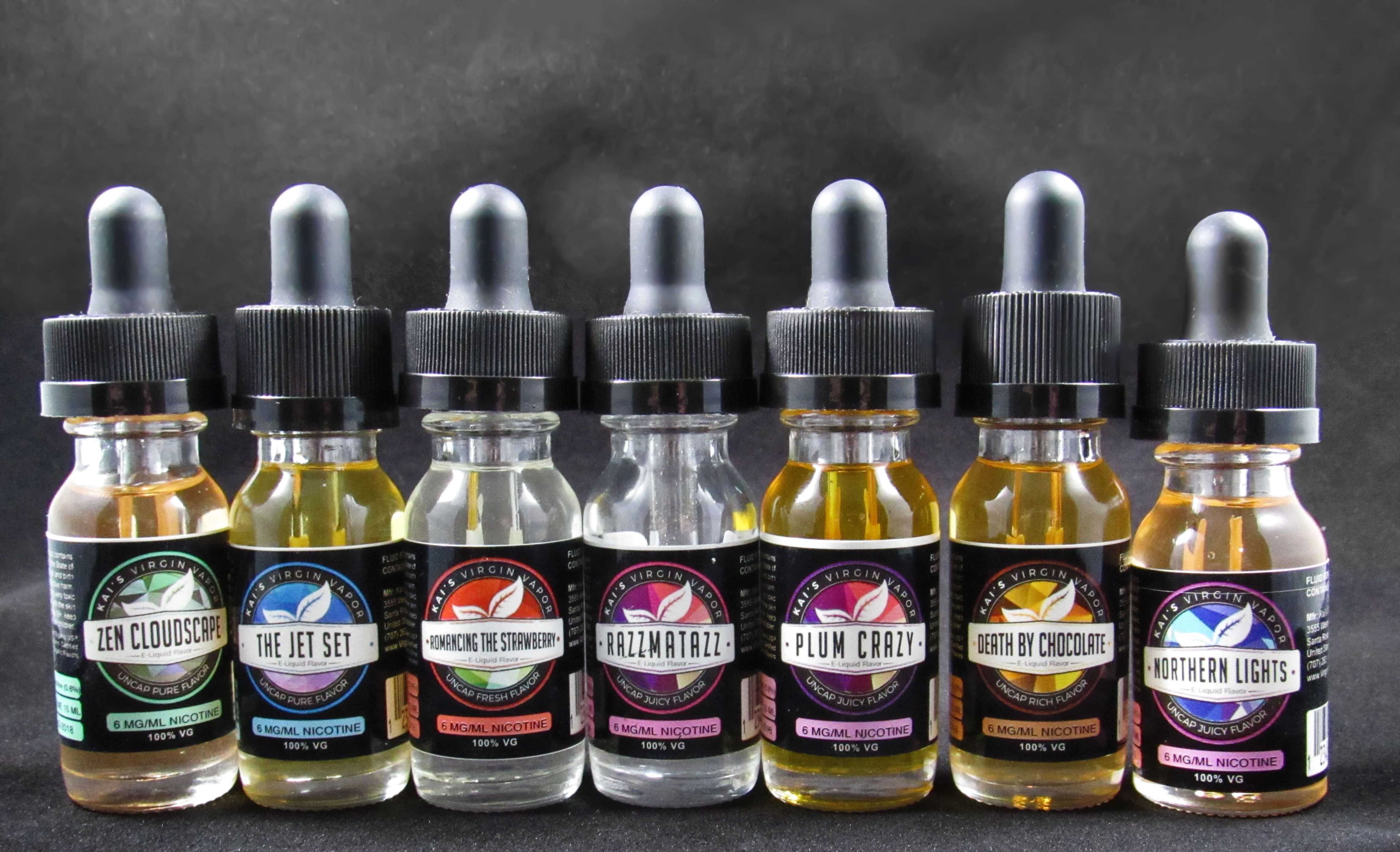 Kai’s Virgin Vapors offers a ton of all-natural flavors that are designed to meet the needs of any palate. If you’re a fan of premium e-liquids and like to get your money’s worth, then this is the ultimate brand for you.

Kai’s Virgin Vapor says that their vape juices are extracted from plants. Uhh… ok. When organic foods and cleaners first became the rage, I admit, I bought some. I thought I’d “go green” and be more pure and all that jazz. When I found was that the foods were either lack luster or you couldn’t tell a difference. And the cleaners flat out sucked because they weren’t powerful enough to really clean anything. So, when I read this, I wasn’t sure what I was going to get when I opened it. Kai’s Virgin Vapor is the world’s leading all-natural e-liquid brand, but will their flavors really wow me? Read this Kai’s Virgin Vapors review and find out.

Kai’s Virgin Vapor sent me seven flavors. Those include: Razzamatazz, Northern Lights, Romancing the Strawberry, Plum Crazy, Death by Chocolate and The Jet Set. Now, I’ve never been big on flavors that I have to research just to get an idea of what it is supposed to taste like. So, I was happy that at least half of them had names that gave me a pretty good idea of what to expect. I was definitely excited to fill up my vaporizer and try them out. I started with Razzamatazz.

As soon as I opened the bottle and smelled it … amazing. I love raspberry and this juice is wicked good. It’s sweet and strong and very, very raspberry. Man, I could just sniff the bottle and love it, but the taste really seals it. I was afraid that the plant extract would make it weak and dull, but Kai’s Virgin Vapor totally delivers with this flavor.

Seriously guys, this one if so strong you can smell it before you even open the bottle. I’ve tried a lot of chocolate flavored juices that ended up in my overflowing crappy juice drawer. For whatever reason, chocolate seems to be a hard flavor for juice companies to create. But Kai’s Virgin Vapor freaking nailed it! I would say that, by far, Kai’s Virgin Vapor’s Death by Chocolate is my absolute favorite chocolate flavored juice. Ever. It’s like vaping really good hot fudge. Simply awesomeness! And what’s better than coffee and chocolate? Coffee and chocolate with strawberries!

Let’s talk about Kai’s Virgin Vapor’s Zen Cloudscape. This one is described as a mix of jasmine green tea and honeydew. I’ll admit that I could taste both and the flavor was strong, but it didn’t wow me. But, then again, it’s not a flavor combination that really interests me. If this combo is you’re thing, go for it. It’s true to the description and rich.

Oh, and let me add they are good, sturdy glass bottles with a dropper and I love that. I’d rather have that then a plastic bottle, but everyone is different. I know that when I order the 120 ml of bottles of Kai’s Virgin Vapor’s Death by Chocolate and Razzamatazz, they aren’t going to last too long at my house.

Kai’s Virgin Vapors offers a ton of flavors, which hit pretty much any palate. If the rest of the flavors are anywhere near as good as the ones they sent me, then you just can’t miss by giving them a try. They clearly use high-quality ingredients in their flavorings. The best place to order them is directly from Kai’s Virgin Vapor. It’s a one-stop shop for all your organic e-juice needs. They have the best, most high quality products available and you know that you’re getting authentic Kai’s Virgin Vapor e-liquid. No other organic vape juice comes close. Read how they compare to other natural e-juices here.