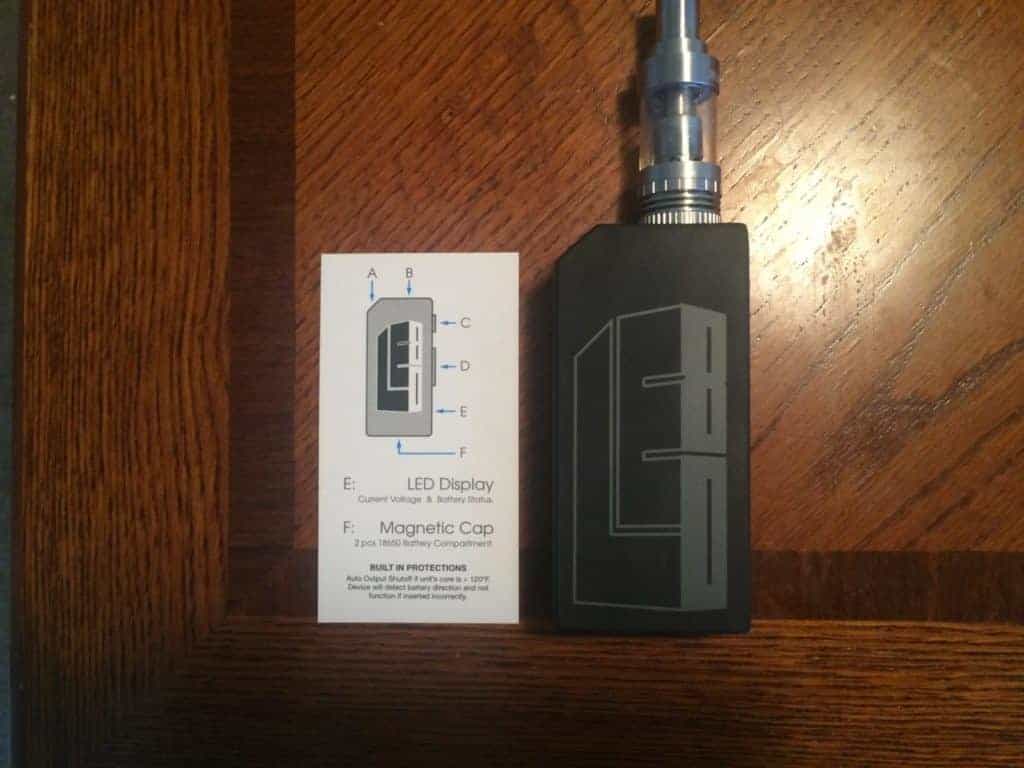 It’s no secret that while mechanical mods still have a lot of appeal to a certain segment of the vaping population, variable voltage box mods are currently the hottest trend in the world of vaping.  In this saturated market full of companies that are trying to create the best box mods, no one is doing it better at this price range than Lotus with their LE80 mod.

Contents
The Lotus LE80 comes in a box that contains the mod and an instructional card that gives you information about the location of different parts of the mod, as well as information about what each of the buttons do.

The LE80 contains a number of high end components and features that aren’t normally found in box mods in this price range.

First of all, everything feels sturdy and high-end. It’s not made out of cheap plastic and all of the components fit together perfectly. The battery cover slides off with minimal force, but it’s magnetic so there’s no worry about it accidentally sliding off. The sound that it makes when you slide it back on after placing the dual 18650 batteries in is very satisfying in a weird way. It really makes you feel like this is a sturdy, high quality device.

The spring loaded post is capable of firing all 510 threaded tanks from 0.2 – 5.0 Ohms. I had no issues with the threading when screwing on my Sense Herakles or my Aspire Atlantis tanks.

The potentiometer makes it easy to adjust the voltage with your fingertip. The voltage range is 3.3 – 6V.

The small fire button is placed in a perfect position, it’s right where your thumb will naturally rest while vaping so there’s no fumbling around to activate it. Everything about this mod appears to be designed with ease of use and functionality in mind.

Additionally, the LE80 includes an auto shut-off feature if the unit’s core reaches a temperature of greater than 120F. It will also not function if the batteries are inserted improperly for added safety.

The dual 18650 batteries give this thing a SHIT TON of power. I used a couple of different sub-ohm tanks on this thing and the vapor production was out of this world. Everything about this mod is extremely intuitive, so even if you’ve never vaped a day in your life, you’ll be able to figure it out.

The ability to choose whether you want to see battery life or current voltage is definitely an added perk for people like me who always want to know the exact numbers for everything. The battery life setting was extremely accurate so I wasn’t surprised when it was time to charge my 18650 batteries.

If you’re looking to jump on the regulated box mod bandwagon, it doesn’t get much better than this. Get your LE80 mod at lotusvaping.com for $69.99.