I was full of nostalgia when I received a package from Blu E-cigarettes. The very first electric cigarettes I ever saw or tried was Blu. It felt almost exactly like a stinky cigarette, except it was black. It even had a charger than looked like a pack of smokes. It was different and new at the time, and I remember puffing away with basically no throat hit or nicotine satisfaction.

But, that was years ago, and the e-cigarette market is continuously changing, so I was excited to try what they had sent me. Blu’s myblu has the look and feel of another, very popular, small e-cigarette. Myblu is slim, flat, and easy to handle. It’s also extremely light. I mention this because some people who consider making the switch from regular, ole smokes to an electronic cigarette or vape pen, don’t take the leap of faith due to weight and bulk. The myblu vaporizer is compact and light, which impressed me. 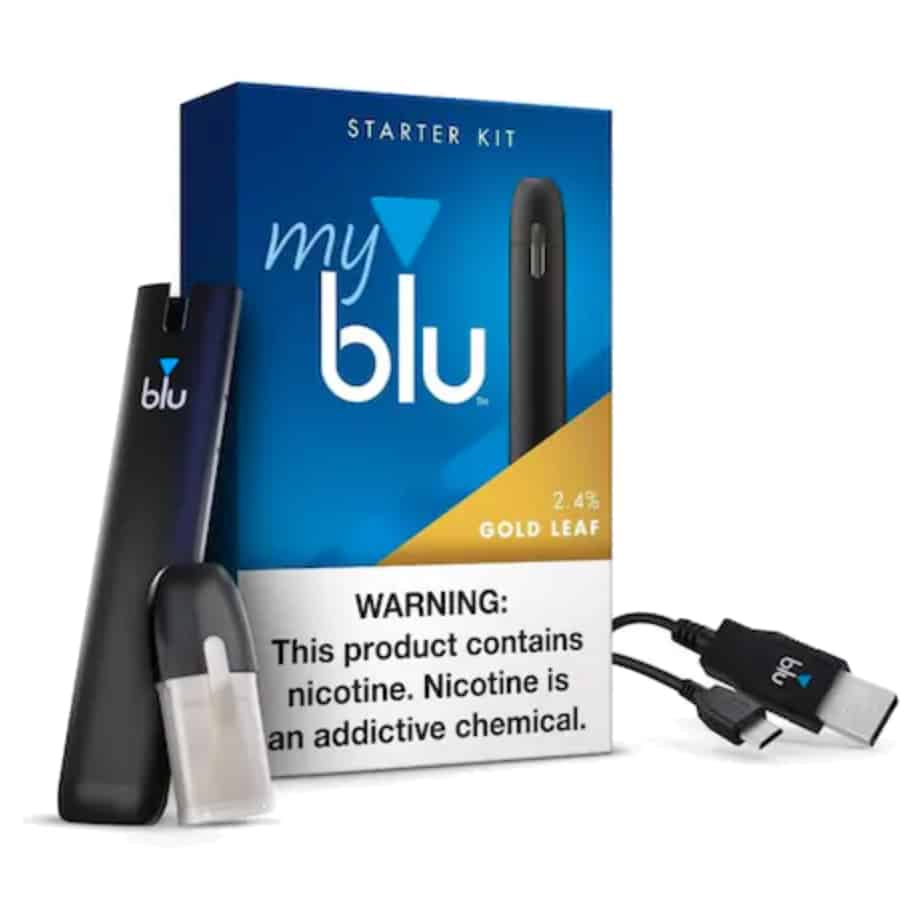 Check It Out
We earn a commission if you click this link and make a purchase at no additional cost to you.

Myblu vape devices use a “liquidpod,” which clip into the end and is pre-filled with flavored e-liquid. Blu has made the design very user friendly. No on/off switch, no buttons to press. The end opposite the “liquidpod” lights up when you hit it, and the color of the light lets the user know how much battery is remaining.

Another note on the “liquidpod” is that it includes the mouthpiece, so every time you want to refill it, you just replace the pod system, and always get a new mouthpiece. Always awesome.

Naturally, as soon as I got it, I wanted to try it. The information included with the starter kit says that the myblu comes with a partial charge but that it should be fully charged before the first use. It took about 10 minutes for it to get a full charge and had decent battery life—a bonus in my book.

Quick charging always ranks higher in my book. No one likes to wait around to use a device, and these electronic cigarettes aren’t like a pod mod. You can’t just keep an extra set of batteries around, so you have to wait.

I’ve found that hitting the myblu all day, as my usual device, that I charge it about every day and a half. If I were going to use it regularly, I would probably be in the habit of charging it when I took a shower. It takes about 20 minutes to charge myblu from a red battery light and can be charged using any USB cable. If you are confused about how to use the pen, you can always consult their user manual, which comes with every system you buy.

The Myblu pods are both neat and a pain in the butt. Neat because vapers using it don’t have to mess with a bottle or juice, or try to hit a small target to fill something up. You just remove the packaging and slip it into place, the little snap lets you know it’s in there right. They fit in securely. I haven’t had a problem with any slipping out on me when it was moved around. And, they seem to last. I’ve been hitting the same myblu liquidpod for about a week, and I have used up about half of it.

Now, the liquidpods are a pain in the butt because they leak juice. I have not had them leak juice outside of the device. But, I have, frequently, gotten a mouthful of juice when I went to hit it.

I can’t find a rhyme or reason to why the juice comes out. I’ve tried hitting it and laying it flat, it still happens. I’ve tried hitting and keep myblu at a slight angle, still get mouthfuls of juice. Now, it’s not every hit. It’s every few hits and just enough to be annoying.

Who should use the MyBlu?

Now, let me tell you why myblu won’t be becoming my daily device. Some electronic cigarette users like something that tastes and feels like a smelly smoke. Others want precisely the opposite, they love the non-tobacco flavors, and full hand mod feel.

My husband is the first, and I am the latter. And guess what, he has been begging to steal my myblu.

If you are someone that wants to feel like you are smoking, but without the smell and nasty health risks, myblu is right up your alley.

Blu offers eight flavors of liquidpods. I got to try Polar Mint, Gold Leaf, and Magnificent Menthol. Each of these flavors tastes exactly like what it sounds like it will. And Blu usually stands true to form, so as a consumer, I would feel that Vivid Vanilla, Classic Tobacco, Blueberry, and Carolina Blend would taste pretty much as described. Remember, Blu concentrates on a tobacco flavor, so even the Polar Mint has a tobacco taste, a pretty dang good minty tobacco taste.

You can order the myblu starter kit from the manufacturer for $19.99. The kit includes the myblu device, a micro USB charging cable, and one liquidpod. Compared to other vapes like the Juul, this is an excellent price for everything you need to get started.

If a small, rechargeable device is what you are looking for, give the myblu a try. If you are a smoker trying to give it up, myblu is worth checking into. With the physical and taste similarities to a traditional cigarette, it may be just what you need to put down the old pack and start with something new and electronic.

The best place to buy the myblu is from Direct Vapor.