A new, peer-reviewed study published in the Journal of Environmental Research and Public Health documented quitting habits of 72 UK smokers, using vapes, over a 90 day period. At the end of the 3-month period, researchers reported that 37% of trial participants had given up smoking combustible cigarettes.

A few participants dropped from the trial throughout. Of those that remained, however, researchers reported that 18.5% of trial subjects achieved “complete smoking abstinence” by day 30. A quarter of those surveyed were smoke-free by day 60. A remarkable 92% said the Blu PRO helped them quit during the trial period.

From baseline (the start of the trial), participants coded as ‘daily smokers’ reduced dramatically at the 30-day mark, from 88% to 17%. “The difference in daily smoking between day 60 and day 90 was not significant,” researchers wrote.

Those who remained daily smokers reduced the number of cigarettes smoked per day, from roughly 14 down to only 3. 81% of those surveyed said they continued to use the Blu PRO device for all 90 days of trial. “Overall, “less than 10% reported the use of other e-cigarette brands at the 90-day follow-up,” researchers reported. About ¾ of all participants at the end stated they would continue to use the Blu PRO for another month, at least. 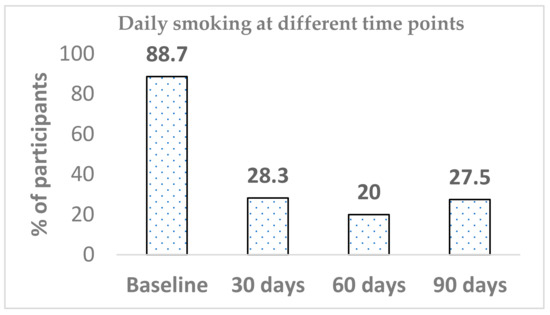 Flavor of the Week

Subjects also claimed flavors were key in helping them continue using the device instead of smoking cigarettes. By the 90-day follow-up, trial subjects vastly preferred non-tobacco flavored juice versus the traditional tobacco flavor, at 75% to 13%, respectively. Up to 25% of participants also reported purchasing juice refills beyond the reimbursement amount at the 90-day mark.

The study was funded by Blu Vapes’ parent entity, Fontem Ventures. Their report states, however, that Blu PRO devices were not provided “at the request of the funder,” but instead to limit the study to one device for more concrete valuation, opposed to “the broader ENDS category.”

McKeganey, et al. gave participants Blu PRO vape pens and a variety of flavored juices, including tobacco, menthol, and fruit flavors. Researchers trained subjects how to use the devices, “culminating in having to demonstrate competency and confidence to use the e-cigarette and e-liquids safely and effectively themselves by assembling and filling up the e-cigarette with the e-liquid of their choice, and puffing on it,” the study reads.

If participants damaged or broke their devices, they were supplied with a new one. All subjects were reimbursed when purchasing juice refills, after having been given “an initial free supply of the Blu Pro Kit and three 10-mL e-liquid refill bottles”  at the onset when they met with researchers. Study subjects were also paid £50.00 each time to complete 4 surveys taken over the study’s duration (£200.00/each total).

Participants ranged from ages 18-65, were predominantly single, white, British or Irish, and male. During an initial survey, most participants said they smoked 2-30 cigarettes daily. Subjects’ first cigarette experiences ranged from age 7-25; 100% were still smokers at the time of the study. “Participants who responded ‘Every day’ were coded as a ‘daily smoker,’” researchers stated. Over half of participants were employed full-time, earning less than £20,000 annually.

McKeganey and team recognized certain limitations to the scope of their study. “This was a small, exploratory, and uncontrolled study with a convenience sample and self-reported measures of smoking behavior,” they state. “As a result, the findings should be interpreted with caution.” They note a possible pitfall in not knowing if “the positive reductions in smoking persisted beyond the three-month period over which respondents were provided with free products.”

But, the team, too, sees the broader implications of vapes as a valuable smoking cessation tool. “There can be little doubt as to the importance of encouraging and enabling smokers to cease smoking.” They point out the obvious, that the best thing is for smokers to quit using cigarettes entirely, but that the addiction makes that decision very difficult.

Instead, researchers note the value add of offering smokers the alternative (especially for free) and letting them learn the potential of devices on their own: “On the basis of this study, there is likely to be merit in providing smokers with access to e-cigarettes, letting them explore the various different flavors, and thereafter providing them with the opportunity to utilise these products either alongside or in the place of combustible products.” Researchers argued health service providers should consider a point at which they could offer vapes and other alternatives to smokers looking to quit.

PrevPreviousA Year Later, No Progress in FDA Tobacco Plan
NextIt’s 2018 and Americans Still Think Vaping is as Bad as SmokingNext