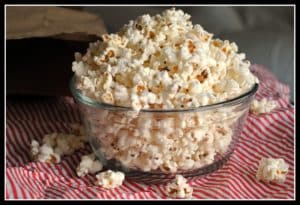 As with any activity, there are health concerns associated with vaping. Let’s face it: we now live in a world where everything can potentially damage our health. Even seemingly harmless places such as playgrounds pose threats like those attributed to lead-based paint used in swings or slides.

Contents
What is Popcorn Lung?What are the symptoms of popcorn lung?What causes popcorn lung?Can I get popcorn lung from vaping?How do you treat popcorn lung?How can I avoid getting popcorn lung?What other popular vaping myths should I be aware of?Vaping is harmful because it exposes you to nicotineSecond-hand vapor is harmfulVaping can encourage the youth to start smokingE-cigarettes can explodeVaping is just for cloud chasersVaping is more expensive than smoking cigarettesE-juice has anti-freezeAdditional Resources

Some have scientific studies to back them while others are pure speculation. One of the issues raised is the possibility that vaping can cause popcorn lung.

What is Popcorn Lung?

Popcorn lung is a more popular name for bronchitis obliterans. It is a condition where the smallest airways of the lungs get damaged. The result is a hacking cough and shortness of breath.

They call it popcorn lung because it can be caused by breathing in the chemical diacetyl. This chemical is used to flavor microwave popcorn, but everyone’s favorite movie-time snack is not the only culprit. So you don’t need to start throwing away your stack of microwave popcorn boxes for your Netflix and Chill nights. Popcorn lung can also be caused by other chemicals or lung illnesses.

Our lungs are the organs where our blood picks up oxygen. Oxygen is then distributed to the cells in our body. Whenever we breathe in oxygen, it flows through our windpipe and into our lungs. Our windpipe separates into two tubes called the bronchi. These two tubes lead to our left and right lungs.

Inside our lungs, these tubes separate multiple times. Imagine a tree branch separating into smaller branches, that is how it looks. The tiniest of these branches, like the twigs of a tree, are called bronchioles. Their ends have tiny air sacs called alveoli. These air sacs contain the oxygen picked up by our blood.

What are the symptoms of popcorn lung?

It is hard to detect if you have popcorn lung. The symptoms are easy to overlook. It is also easy to mistake it for other lung diseases. Let’s say you have asthma. You’re used to having difficulty breathing. So, if you develop popcorn lung, you might not notice the symptoms because asthma and popcorn lung make you feel the same.

It usually takes between 2 and 8 weeks before popcorn lung symptoms are felt. These symptoms gradually worsen over a period of several weeks to a few months.

The most common symptoms of popcorn lung include:

We’ve already established that the primary cause of this condition is diacetyl. This was discovered after workers at a microwave popcorn-packaging factory were found to have bronchitis obliterans. The said factory has a higher incidence rate of bronchitis obliterans compared to other companies. This prompted some companies to immediately stop using diacetyl as a flavoring agent.

Aside from diacetyl, another common cause of popcorn lung is acetaldehyde. This is a chemical found in the smoke from marijuana and some electronic cigarettes.

Other chemicals that can cause popcorn lung include:

Aside from the chemicals listed above, you can also get popcorn lung from serious illnesses affecting your lungs. Some forms of pneumonia or bronchitis can cause popcorn lung. Popcorn lung is also a side effect of rheumatoid arthritis.

This condition is also common to people who had a lung transplant. You may get popcorn lung if your body rejects the new organ.

Can I get popcorn lung from vaping?

However, the levels of diacetyl that they found are not enough to cause popcorn lung. We’re talking about levels that are hundreds of times lower than those found in cigarette smoke. Even the levels of diacetyl in cigarette smoke are not enough to cause popcorn lung. If they can, you would have heard about the said disease being used as a warning to smokers.

You should also know that diacetyl is no longer used as a flavoring for e-liquids. So, you’re not getting exposed to the same chemical when you vape. They’ve discontinued the use of the aforementioned chemical in e-juices. This happened as soon as the study that ties diacetyl to popcorn lung was released.

How do you treat popcorn lung?

One option is to use corticosteroids. These cortisone-like medicines provide relief for inflamed parts of the body. When you take corticosteroids, they lessen swelling, itching, redness, and allergic reactions. Since popcorn lung results in the inflammation of air passages, relieving the inflammation can help you get more oxygen into your blood. It can also help you breathe easier.

Your doctor can also recommend immunosuppressant therapy. This can help decrease your body’s immune response.

Aside from corticosteroids, your doctor might also prescribe other medications, depending on your symptoms. Your doctor can prescribe:

In severe cases of popcorn lung, lung transplant may be needed. However, the disease may redevelop as a complication of the transplant.

In rare cases, popcorn lung can be fatal if left untreated?.

How can I avoid getting popcorn lung?

The easiest way to avoid popcorn lung is to avoid exposure to the chemicals that cause the disease. If they cannot be avoided, you must limit your exposure as much as you can.

Since fumes from welding can cause popcorn lung, you need to minimize your exposure to the said fumes. Wear protective gear all the time if you work with welding machines. Wear a mask to avoid inhaling anything toxic.

If you use formaldehyde in your work, make sure that you use protective gloves and a face mask. This can lessen the risk of exposure to formaldehyde.

Regarding the presence of diacetyl in e-juice, you don’t need to just quit vaping. You can check the ingredients used in making your favorite e-juice. Check if they use diacetyl as a flavoring agent. Although the levels of diacetyl in e-juice are quite low, you can just switch to another brand that doesn’t contain any if you’re worried.

What other popular vaping myths should I be aware of?

Vaping is harmful because it exposes you to nicotine

Most of us think that nicotine causes cancer. I confess that this is something that I used to believe. And who can blame you if you do? Nicotine is a word associated with smoking. However, nicotine actually carries minimal risk of harm to your health.

Nicotine is the chemical that makes people addicted to smoking. There are thousands of other chemicals present in cigarette smoke that cause harm to the human body. These harmful chemicals are not in e-juice.

Carbon Monoxide and Tar are two of the most harmful elements in cigarette smoke. The vapor you produce when you vape does not contain either of those nasty products. Some chemicals found in tobacco smoke are also present in vapors, but their levels are quite low.

Exposure to second-hand smoke is harmful to your health. There are even studies indicating that third-hand smoke is also harmful. This has been proven by the health authorities. This is one of the reasons why smoking in enclosed public places and workplaces have been banned in several states.

Your typical e-juice is composed of nicotine, propylene glycol and flavorings. Unlike with cigarettes, there is no side-stream vapor emitted to the atmosphere when you vape. You only release your exhaled vapor.

Vaping can encourage the youth to start smoking

Some claim that vaping is a gateway to cigarette smoking. However, there is no evidence to support such claims. Those who like vaping are typically turned off by the taste and smell of cigarette smoke.

We’ve seen news reports of e-cigarettes exploding. These are incidents related to the improper use or storage of batteries. When used properly, e-cigarettes won’t explode. You can do this by taking care of your battery the same way that you would any other battery. Follow the battery safety guidelines set by the manufacturer.

Vaping is just for cloud chasers

We’ve all seen those YouTube videos of vape enthusiasts with their fancy vape tricks. If you haven’t tried vaping and your only point of reference is those videos, then a vape enthusiast producing massive plumes of vapor will be your go-to mental image of a vaper.

The truth is people primarily use e-cigarettes mainly as an alternative to smoking. This means most vapers don’t go out of their way to produce huge clouds of vapor.

When you see a vaper with huge clouds of vapor around him, this is because of the way he set up his mod. It’s a personal preference. When you get into vaping, you can set up your mod however you want it to. You can make it as discreet as possible. You can make it more powerful if you want to.

The initial cost of setting up your mod is more than the price of a pack of cigarettes. Once you have your set up complete, you just need to buy the consumables. We’re talking about coils, atomizers, and your e-juice. E-liquid costs less than a pack of cigarettes. The long term cost of vaping is less compared to smoking.

Propylene Glycol is an ingredient of anti-freeze. PG is also used in e-juices. This is probably the source of the myth concerning vaping and anti-freeze. The truth is, manufacturers, add PG to anti-freeze to make it non-toxic. E-juices don’t contain anti-freeze.

As vaping becomes more popular, there will be more scientific and medical research about its effects on the human body. With each new study, more myths about vaping will be either proven or discredited. One of the myths about vaping that has already been busted is that it causes popcorn lung.

Popcorn lung may be a rare disease, but it is very real. There are commonsense ways to prevent exposure to the chemicals that cause it. Avoiding vaping is not one of them.