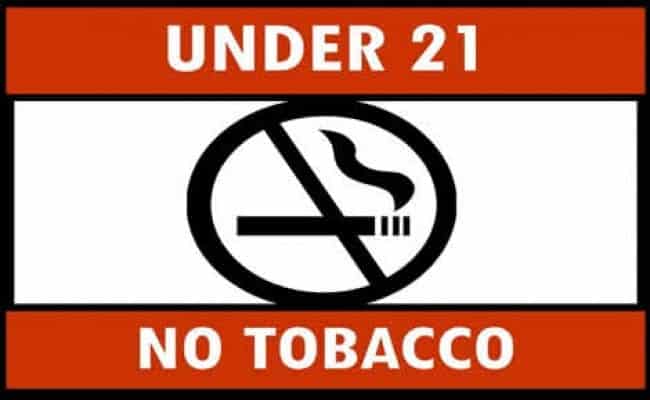 Have you heard of Tobacco 21?

It’s a national organization that is pushing to change the tobacco purchase age from 18 to 21, all across the country.

Part of the organization’s tag line is that “clever marketing by the tobacco industry, pushing small cigars, hookahs, e-cigarettes, and flavored vaping products, has put millions of young people at risk of a lifelong lethal nicotine addiction,” according to its website.

The lure of cigarettes, with all that crafty tobacco industry marketing, is just sucking in minors left and right. And those dang flavored ones are very much too blame.

And, to top it off, the organization has apparently been quite successful.

There are a total of 217 cities around the country that have already passed legislation to up the legal age to buy tobacco products from 18 to 21.

Let me just say this, very plain and clear before I go off on my tangent: I do not support nor do I condone underage smoking or tobacco use of any kind.

I am a mother of three and while they are all 10 and younger, I do not want smoking or tobacco in their futures. That’s my dream as a mother. I would not purchase tobacco for a minor nor would I support or condone anyone that does.

Now, with that being said, I think it’s both completely asinine and insulting to raise the legal purchase limit of all tobacco products from 18 to 21.

Let’s look at this for a second.

Under the laws of our land, an 18-year-old is considered a legal adult. That 18th birthday is a magical number that allows someone to change from a child to an adult, allowing them to make adult decisions.

The authority of their parents and legal guardians diminishes, and they are open to make their own decisions.

They can vote and run for elected office. They can contribute to the decision of who our national leaders will be.

We value that they are smart enough to make that choice.

This 18th birthday, under our current laws, also allows them to enlist in military service.

An 18-year-old is considered both smart enough and mature enough to decide whether they want to dedicate their lives to their country.

They are allowed to sign on the dotted line (now, that’s an expression, I’m a veteran and there is a shockingly disturbing amount of paperwork and hoops to jump through to join the military) and write a check to their country, payable with a price that may include their own lives.

According to the website snipeme.com, 872 United States service members under the age of 21 were killed in Iraq, between March 2003 and December 2014.

Keep in mind another number, 25,493 American military members were killed during the war in Vietnam.

The way I look at it, if someone is old enough, wise enough and mature enough to fight and die for our great land, then they most certainly deserve a smoke if they want on.

And, while I have put down the stinky sticks, if they decide they want one, let them have it.

Also, while we are on the topic, I feel that these 18-year-olds that are mature enough to do this deserve a dang alcoholic drink if they want one, but that’s an entirely different argument.

Now, there’s an entirely different group of 18-year-olds out there.

Remember the college kids that we read about after Donald Trump was elected president?

The ones that for some reason that I cannot personally fathom needed crayons and quiet rooms to “cope” with the election results?

I don’t think that this particular group of 18 to 21 year olds would be mature enough to handle such an important decision as tobacco use.

But, again, that’s just my opinion.

Our nation is not set up to allow some 18-year-olds to make some decisions and others to make other decisions.

We are set up that all 18-year-olds are allowed to make these decisions.

Either they can, or they can’t.

I feel that if they are old enough, mature enough and competent enough to enlist in military service, or to chose elected officials, then they should afforded the decision of tobacco use or not.

They should also be allowed the decision of partaking in an adult beverage or not.

And, being an avid vaper, and a gratefully former smoker, I want them to have the option of electronic cigarettes.

The few studies that have been done and released about the effects of vaping on the body and the surrounding air (in reference to second hand smoke) show that vaping is considerably less damaging that the cancer-causing stinky sticks.

In addition to not smelling, having foul breath, having my lungs functioning like lungs again and just all-in-all feeling better, I can say from experience that if a person makes a decision to use tobacco and/or nicotine products, then I suggest making the decision to vape.

Your body will thank you.

Let me again speak from experience, if I had the opportunity to go back and never pick up a tobacco/nicotine product, I would probably have just said no.

But, that also applies to many other aspects in life.

A good many of us have made some pretty big decisions, life altering decisions, which we would wish to change.

But, that’s not how it works.

The best we can do is make the wisest decisions that we can moving forward.

And the best decisions in my situation is vaping, hands down.

Trying to keep tobacco/nicotine products out of the hands of those between the ages of 18 and 21 certainly isn’t going to be easy. Just like alcohol, because let me tell you, that battle just isn’t working.

I, personally, would like to see our law enforcement energies spent in other areas. I feel that trying to enforce something like this is a waste of resources.

If an 18-year-old is old enough to enlist and old enough to vote, I feel that an organization saying they aren’t old enough to make an educated decision on using tobacco products is simply insulting.

Let me be adults, let them live and learn.

We did and it worked for us.