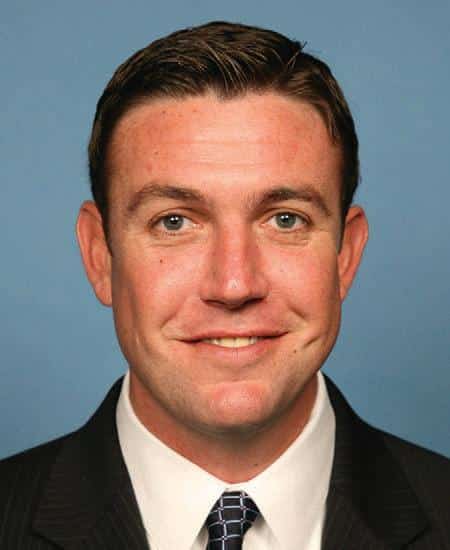 Rep. Duncan Hunter has long been one of the biggest supporters of vaping rights in a Congress full of anti-vapers, as proven when he co-sponsored HR 2058, an important piece of pro-vaping legislation. Today he took it up a notch when he published an eloquent defense of vaping in The Hill:

“Yes, I vape.  On occasion, I might even smoke a real cigarette.

Through my military career, including three combat tours, I even experienced chewing tobacco.

Now that I vape, does it mean I am one step closer to dying than say, someone who might drink too much, eat too much red meat or live an all-around unhealthy lifestyle?

To vape is to smoke an electronic cigarette, for those who don’t know.  An e-cigarette is different from a regular cigarette, mainly because it does not contain tobacco.  E-cigarettes contain a liquid that is vaporized—hence, the word vape—and inhaled.  It might taste and smell like tobacco, but it’s not.

It’s true that vaping isn’t as sexy as smoking old-fashioned cigarettes.  Generations of Americans were brought up smoking traditional tobacco products and to them, vaping may appear to be nothing more than a fad, set to eventually burn out.  They’re wrong.

The reason I vape is simple: It’s so I don’t smoke cigarettes.  I vape knowing that I’m not inhaling tobacco.  Most importantly, I vape because I believe it could save my life.

There are millions of Americans like me, who are choosing e-cigarettes over their traditional counterpart.  Now the Food and Drug Administration wants to force me and millions of others to revert to cigarettes through the issuance of new regulations.  What the FDA is proposing is a date of February 15, 2007, to require approval for e-cigarettes, even if they are already being sold.

To comply, any company that manufactures e-cigarettes must submit an application, to include test results on health risks.

The problem is that most e-cigarettes didn’t exist before February 15, 2007.  So if the FDA gets its way, not only will modern day e-cigarettes, with all their advancements and improvements, no longer be available for purchase, but thousands of small businesses specializing in the sale of vaping pens and accessories will be forced to close their doors.

Also, whatever products did exist before 2007—which people are sure to continue buying—will lack all the improvements that have transformed e-cigarettes into a more acceptable alternative.  Other consumers may choose to go back to real thing.

There’s no science behind the FDA’s proposed date.  It’s completely arbitrary.  This is not to say that a grandfather date shouldn’t exist, maybe one should, but there’s no other motive behind the FDA’s date than to deny Americans a product that is becoming a suitable replacement to cigarettes.

If the FDA won’t change the proposed grandfather date then Congress must—at least to the date a regulation is issued.  Pertinent legislation has already been introduced in the House and discussions are underway to possibly include a date change in forthcoming omnibus legislation.

It’s hard to imagine images from past, of soldiers storming beachheads with vaping pens in their mouths, men in workshops and factories billowing clouds of vaporized smoke, or men and women in bars and social gatherings talking to each other as they vape.  But this is 2015—and surely, had the technology been around then, we’re sure to see much of what we see today: Americans turning to a product that reduces their urge to put a cigarette to their lips and keeps tobacco out of their mouths and lungs.

The FDA should wise up.  And if their true goal is to reduce cigarette use, then imposing a prohibition of sorts on e-cigarettes is senseless.  Then again, maybe the FDA is counting on a surge in lighter sales to account for the cost—personal and financial—of their ill-conceived regulation.”

PrevPreviousAre UK Doctors About to Prescribe E-Cigarettes?
NextHere’s Why the “Popcorn Lung” Stories Are a Load of HorseshitNext