Before we even get started, it’s important to note that the Revival is not meant to be used with e-juice. This vaporizer is intended for oils, such as CDB and THC oils.  I know most of our audience consists of e-juice vapers, so if oil isn’t your thing this isn’t the vape for you. Now that the disclaimer is out of the way, lets move on to the actual review.

The contents of the box include the Revival vape itself, one tank for oils, a USB charger, and an extra magnetic ring.

The first thing that you’ll need to do is fill up the tank with your choice of oil. To fill it up just remove the mouthpiece and then pop off the little plastic nipple. Then, using an eye dropper fill the tank through the small hole. Once it’s filled all the way up, put the nipple back on and snap on the mouthpiece and you’re ready to start vaping! It doesn’t get much easier than that.

The bottom of the cartridge features a small removable gold-colored metallic ring. This is how the cartridge secures to the Revival: just slide the cartridge into the hole on the top of the vape and it’ll secure itself magnetically. There’s no need to screw it in using a 510 or any other type of connection. The coolest thing about the magnetic securing system is that it doesn’t lock you in to using their proprietary cartridges. If you want to you can screw the magnetic ring onto your preferred cartridge and make it compatible with the Revival. 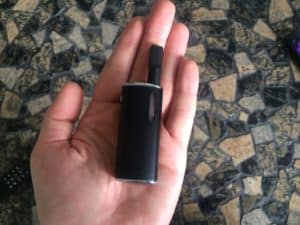 The revival may be one of the most simplistic vaporizers I’ve ever used (and I mean that in the best possible way). There are no confusing wattage or temperature control settings. No ridiculous LED screen. Just a single button that you press when you want to take a draw on the vape. You turn the device on and off by clicking on the same button three times (it’ll glow blue to let you know that it’s on). If you’re a fan of devices that have all kinds of advanced features and settings to tinker around with, this is not the vaporizer for you. But if you want a simple, elegant device that just works, then the Revival is perfect for you.

The Revival features an internal 650mAh lithium-ion battery. The battery is recharged by using the included USB charger, and it also features passthrough technology, meaning that you can still vape even when the Revival is recharging for those times when you just can’t wait. The battery lasts an incredibly long time, I was vaping on this thing on a fairly regular basis and didn’t have to recharge until about 3 days later.

The Revival is available in three different colors: Calloway (black), Cleo (gold), and Charleston (silver). The model that I reviewed was the Calloway.

The vape itself appears to be built out of a fairly sturdy aluminum type material. I didn’t exactly subject it to an advanced stress test, but in my day-to-day use of the device I didn’t notice any scratches or dings on the Revival. So it appears to be fairly durable.

It measures in at only 2.5 inches, which makes this an extremely portable mini-vaporizer. I had no problems fitting the Revival in my pants pocket and sometimes I completely forgot that I had it.

Overall I’d recommend the Revival to anyone who wants a dependable on-the-go oil vaporizer. However, if you really want the latest technology and love to have tons of features, you may want to pass on this one.