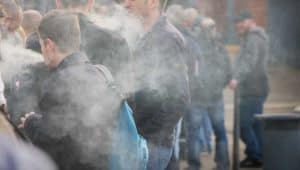 The research that has emerged is starting to show that, while it’s not completely healthy, vaping directly is significantly less bad for you than smoking. So what does the science say about the effects of secondhand vapor on bystanders?

We’ve known that secondhand smoke is devastating to people’s health for a few decades now. But what about secondhand vapor? Is it really “just vapor bro”? Or does it contain chemicals that might harm the people you care about?

What is secondhand vapor?

Secondhand vapor refers to the aerosol (aka “vapor”) that is produced when you exhale. This secondhand vapor lingers in the air long enough that bystanders will be at risk of inhaling it.

A lot of vapers believe that the ban on public cigarette smoking should not apply to e-cigarettes. Since vaporizers don’t actually produce any smoke (since there is no combustion), that means that there is no secondhand smoke. No smoke means no health risk to innocent bystanders, or so the argument goes. But does that belief really hold water? What does the science say about secondhand vapor and its effects on people who breathe it in?

It’s true that secondhand smoke is a product of combustion from traditional cigarettes. When you burn any substance with fire (especially tobacco), you’ll release carcinogenic particles, carbon monoxide, and a wide variety of harmful chemicals. In cigarette smoke, these harmful chemicals are known as “tar”. While indirectly inhaling secondhand smoke is not nearly as devastating to your health as directly inhaling from a cigarette, this smoke has been confirmed to have serious health consequences for bystanders who are exposed to it repeatedly or over long periods of time.

E-cigarettes, on the other hand, do not actually create any smoke. Instead, they create vapor clouds by heating e-juice with an atomizer. The vapor produced by e-cigarettes does not contain any carbon monoxide or tar. This doesn’t mean that e-cigs are completely safe, however. There are trace amounts of chemicals that can be hazardous to your health. But all of the studies to date show that vaping is significantly safer than smoking. This means that the dangers of secondhand vaping are not nearly as bad as those associated with secondhand smoking.

What types of chemicals are in secondhand vapor?

A study by Wolfgang Schober from the Bavarian Health and Food Safety Authority published in the International Journal of Hygiene and Environmental Health found that vaping reduced indoor air quality. In particular, the study found that indoor air quality was reduced by increasing the amount of nicotine, aluminum, particulate matter, and PAHs. These chemicals have been linked to a variety of health risks including lung disease, cardiovascular disease, and cancer.

The good news is that these chemicals are present in much lower concentrations than the horrific levels of deadly chemicals that are found in traditional secondhand cigarette smoke. Igor Burstyn, a toxicology expert at Drexel University, conducted a study where he proved that there was “no evidence of potential for exposure of e-cigarette users to contaminants that are associated with risk to health at a level that would warrant attention if it were an involuntary workplace exposure”.

So do these two studies contradict each other?

Another study from 2016 shows that 93.8% of the nicotine in e-liquid vapor is absorbed by the initial user. This means that there is virtually zero nicotine remaining in the vapor by the time that the user exhales. Secondhand nicotine exposure is not something that anyone needs to be worried about. That’s good news, since nicotine withdrawal symptoms can be extremely unpleasant.

Some people are also concerned about the risks of nicotine that doesn’t get absorbed and falls to the ground and can linger on carpets and furniture. This is a common concern, since whatever nicotine that remains in the exhaled vapor eventually drops to the ground (thanks, gravity!).

The Royal College of Physicians addressed this concern in 2016 and determined that there is no health risk to so-called “third-hand” nicotine.“Nicotine from exhaled vapour can be deposited on surfaces, but at such low levels that there is no plausible mechanism by which such deposits could enter the body at doses that would cause physical harm,” they said in their review of e-cigarette research.

Is secondhand vapor dangerous to breathe?

Almost all of the research to date indicates that secondhand vapor doesn’t have a significant effect on the health of bystanders. Secondhand exposure to e-cigarette vapor may annoy people, but it won’t have any effects on long-term health.

Ironically, the National Institute for Occupational Safety and Health actually tested the indoor air quality inside a vape shop. The results? They determined that levels of formaldehyde and flavoring chemicals were all below the lowest limits allowed. They found virtually no nicotine in the air samples that they tested. If secondhand vapor inside a vape shop doesn’t have any adverse health risk, then it’s safe to say that the much lower levels of secondhand exposure that can be found in any other place are going to be even less of a risk.

Does that mean that you’re free to start vaping everywhere and anywhere? Of course not. It’s still important to respect the wishes of your friends, family, and random bystanders who may not be as excited as you are to try those new e-liquid flavors. Even though the aerosol produced by vaporizers doesn’t have the same cancer-causing chemicals as smoke from tobacco products, it can still cause problems for people who have sensitive lungs or breathing difficulties.

The research on the effects of vaping is still in its infancy. While most studies are showing that vaping is a great smoking cessation method and that it is much less harmful than smoking tobacco cigarettes, the jury is still out on how it actually effects your long-term health.

If you have children in the house, they obviously aren’t old enough to make an informed decision about whether or not they want to deal with exposure to secondhand vapor. Be a reasonable person and take your vape outside. While standing outside in cold, rain, or heat can be miserable; at least you aren’t standing out there with a tobacco cigarette that’s going to end up giving you cancer or lung disease.

You also kind of look like an asshole if you start randomly vaping in a shopping mall, office, or restaurant. Don’t do it. The last thing the vaping industry needs is even more of a negative stigma. Be respectful of other people’s right to not breath in vapor aerosol (aka clouds), and maybe they’ll respect our right to vape in return.

PrevPreviousHow to Quit Vaping
NextVaper’s Tongue: What it is and How to Fix itNext