How to Tell if Your Kid is Vaping: Everything You Need to Know About Teen “Juuling”

Younger people today are generally aware of the dangers of tobacco products. Their effect on long-term health is well-documented and widely accepted. Cigarette smoking among youth is low, anti-smoking advocacy is high. Teens are continually disinterested in what they now know to be a smelly, disgusting, and very unhealthy habit. In its stead, however, a new contender has taken up the mantle of luring adolescents into a similar, yet highly modernized version of smoking.

Electronic cigarettes contain nicotine just as their combustible, organic predecessors do. When used correctly, cigalikes serve as a useful method of nicotine replacement therapy for adult smokers who look to quit smoking cigarettes.

Unlike cigarettes, however, ENDS (electronic nicotine delivery systems) have the advantage of being more easily concealed and used without being detected. They also have the advantage of mixing highly-addictive nicotine with familiar and enjoyable flavors, like sweets. Because of these convenient factors, pod vapes have become a trend of the last few years among young people which is causing problems with nicotine addiction.

Manufacturers are responding to the problem, as they remind the public that their technology is not for underage users. Nor are their products the novelty consumer items young people take them to be.

As kids, they are often unaware of the dangers of pod vapes or the effects of vaping in general. To expect manufacturers or retailers to know how to address teen vape use is not enough. It is up to parents, teachers, and other informed adults to arm ourselves with the knowledge of the health risks and to have healthy and impacting conversations with today’s adolescents about exactly what they may be getting themselves into.

Throughout our entire lives, our bodies evolve and devolve. Tissues, bodily functions, and organs develop and alter over the course of our whole lives. The human brain is the last organ to fully mature. At adolescence, the mind learns through risk-taking and trial-and-error. Younger folks learn more quickly and retain information better than adults. Neurologists say a person can even change their IQ during their teenage years.

Unfortunately, children are also more susceptible to dependence due to their developing internal circuitry. Neural pathways expand and are cut effectively throughout our whole maturing phase to determine how our brains function for the rest of our lives. The prefrontal cortex –  the part responsible for reasoning and self-control – is the last part of the organ to develop. This is why many experts believe that youth e-cigarette use can potentially lead to developing a dependency on nicotine, which could result in them eventually switching to traditional combustible cigarettes.

It is probably no wonder, then, why youth (pre-teen to early-twenties) is when we are most prone to peer pressure and can easily develop dependencies on harmful substances. Once in a teen’s system, addictive chemicals rewire the mind. The limbic system – one of the brain’s ‘reward centers’ – is easily altered. Alcohol, narcotics, nicotine, and even caffeine can easily take hold of these functions, and can easily cause lasting and detrimental effects.

Nicotine studies are no new science. Loose leaf tobacco, from which nicotine is extracted, has been the source of contentious study for decades. Tobacco studies have long told scientists that this chemical adversely affects the brain. Nicotine impairs the prefrontal cortex: Specifically, reasoning and decision-making are affected. Young people who take up nicotine use, like smoking or using e-cigarettes, are at risk of slowing or damaging important brain functions, which could cause problems for them as adults.

A pack of cigarettes contains roughly the same concentration of nicotine as a single pod. Devices like the Juul or the Phix use specific formulae and nicotine salts that contain enough of the extract for just a few puffs to equal smoking a whole cigarette. Since nicotine targets the prefrontal cortex, when kids use a cigalike, their reward centers are targeted, making them want to use it even more. This can cause them to become addicted to nicotine.

This is similar to how smokers develop a habit of smoking cigarettes more frequently until they get to the level of a pack or more a day. One risk of pod vapes and increased nicotine intake is how much easier it is to use them. Flavored e-juices and minimal vapor make pod vapes more enjoyable, and more clandestine, than tobacco cigarettes. Those variables are among the top reasons why ‘Juuling’ has risen to ‘epidemic proportions’ in the US, according to the FDA.

Surveys for the last few years indicate that US teens and young adults use electronic cigarettes substantially more than any other tobacco product on the market. Pod vapes, like tank mods and disposable ENDS, offer a wide range of flavors, with specific attention to sweet, fruity, and other highly pleasant tastes compared to tobacco or menthol. Better flavors naturally attract more (often younger) users, especially if those flavors are reminiscent of candies or desserts.

Additionally, vapes only emit light aerosol vapor that dissipates quickly and leaves just a hint of the sweet smell of its flavor. These factors have made ‘juuling’ easy for youth to do even in school bathrooms or classrooms.

In bathrooms, kids have been able to simply hide in a stall and take puffs from their devices without concern of being caught. In the classroom, they can hide it in long sleeves, and blow vapor into their shirts or backpacks. A Juul looks similar to a USB thumb drive, making most faculty unaware of what their students even have in hand.

After 2015, when the Juul came onto the electronic cigarette market, there was a significant uptick in the number of young vape users. CDC survey data suggests an overall decline in teen vape use between 2011 and 2016, though. Still, the FDA recently commented on the current 2+ million US young people who use pod vapes like the Juul. Commissioner Scott Gottlieb calls the situation an ‘epidemic.’

The agency has issued numerous warnings, fines, and demands to major manufacturers, distributors, and retailers alike. When the FDA originally took over vape regulation in 2015, Gottlieb halted all new e-cigarettes on the market from 2016 forward barring a rigorous application process – which no company has yet been approved through. Pod vapes were on the market already, and were given a lengthy timeline to fulfill their materials – until 2022.

That is, until the recently deemed ‘epidemic’ issue of teens vaping. As of just a couple weeks ago, the FDA has reneged on their initial timeline and given 5 major vape manufacturers just 60 days to compile and present a substantial packet detailing exactly how they intend to combat the problem, or else their devices will be pulled from market (allegedly). But the addictive damage is already done.

With over 2 million young flavored e-cigarette users, the threat of removing devices from official channels could easily create a black market scenario. Friends, parents, and other community members (including teachers and other staff at school) have a responsibility to help youth understand exactly what they’re getting themselves into by using pod vapes. The first step is to know some of the tell-tale signs that someone you know is ‘juuling,’ and then how to help them. 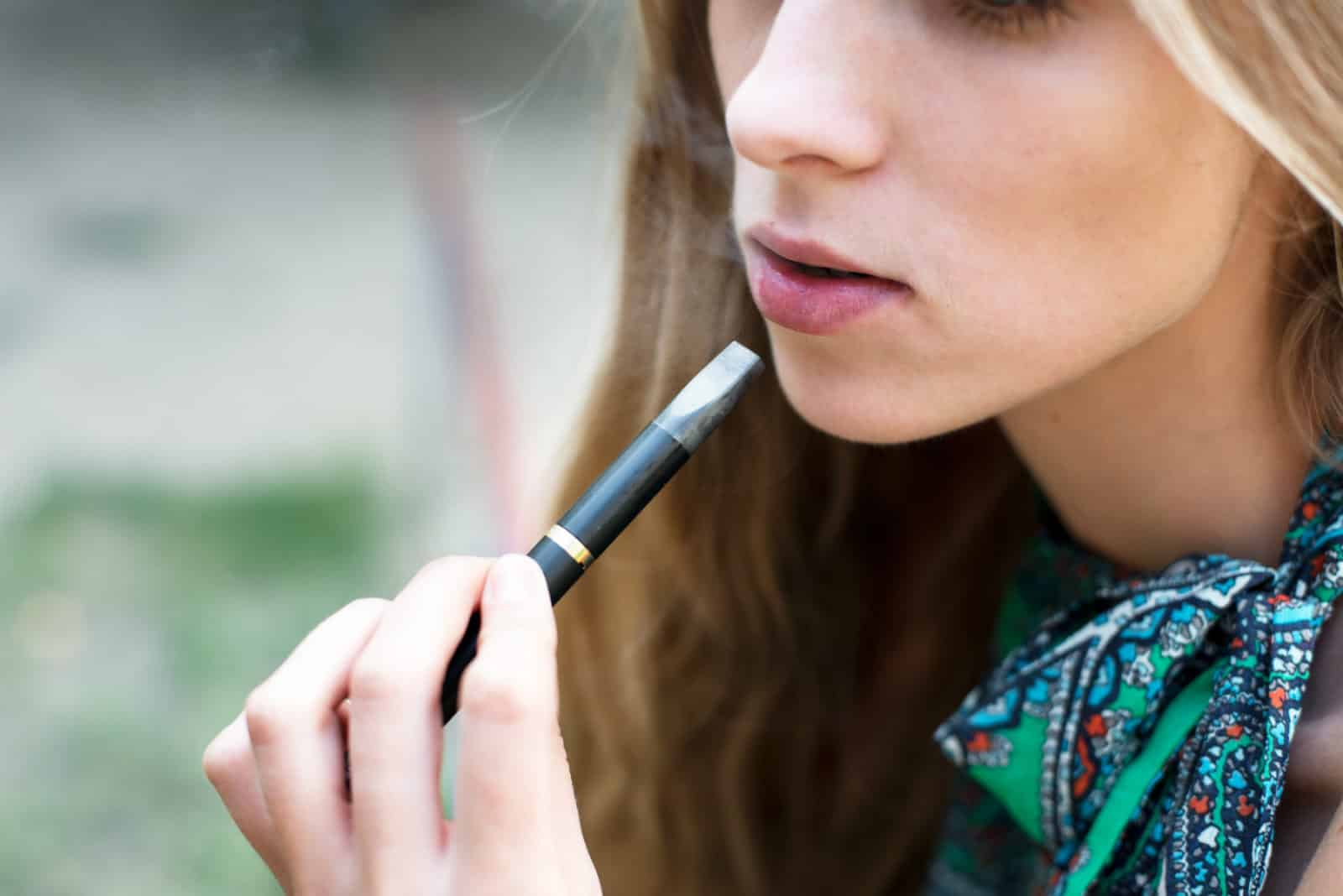 What to Look For – Signs Your Kid is Vaping

There are a number of physical indicators that your child may be vaping. Here are some of the things to look for if you are concerned.

Nicotine affects more than just the body. Addictive substances change the brain’s chemistry, and can lead to some psychological or personality differences separate from typical teenage hormonal changes. Watch out for these signs.

Finally, but not necessarily a physical or psychological factor, is the technology itself. Pod vapes require a USB charger or a charging cable and are battery powered. If you find unfamiliar USB cables, batteries, or empty pods around the house, you may need to address the potential problem. Confronting your young one does not need to be a fight, however. There are some good and bad ways to handle the conversation.

Dr. Laura Offutt, founder of the teen health site Real Talk with Dr. Offutt, recommends approaching the situation casually and calmly. Broaching the subject argumentatively is sure to lead to…well, an argument. Dr. Offutt suggests opening with basic, non-accusatory questions. “What do you think of vaping?” “Do any of your friends or classmates use electronic cigarettes?” Or, “do you know what a Juul is?” These questions invite a conversation and, if inflected without accusation or upset, can lead to a dialogue with the information and answers you are seeking as a concerned parent.

Pediatrician Dr. Pia Fenimore says to avoid closed-ended questions. Yes/no questions are the most obvious example. If you give your teen the chance to answer quickly and shut the conversation down, they likely will. Yes/no questions also often sound more judgmental than their open-ended counterparts. You will almost certainly have to ask a couple of questions with yes/no potential, but follow them up with other questions or commentary to keep the ball rolling. Turn the experience into a talk, not an interrogation.

Let them know of the dangers of nicotine in the abstract. Try to keep from telling them what they are ‘doing to themselves,’ and instead focus on the issue itself. Be a teammate, instead of a parent, advises the US News & World Report. Even let them know aloud that you are on their side. Be sure to set clear expectations, though, too. If you come across as wishy-washy or lackadaisical, your child may not take you seriously. Keep it relevant, but keep it light.

Relay important information about high blood pressure, stress, and the host of other physical health problems that can come from nicotine use. Address the issue, not the user. Remind your kids that the flavor is insignificant compared to the lifetime of issues that comes with nicotine dependence.

E-cigarettes are, on the whole, better than cigarettes for adult smokers to use as a cessation tool. They do contain fewer harmful chemicals, and current research suggests they are a powerful technology to help wean smokers off their tobacco habit. E-cigs do still contain one of the most potentially harmful chemicals as their organic counterparts, however: Nicotine.

Nicotine is an addictive substance. Specifically, the ways it can impact a young, developing mind can be dangerous. Despite the decline in the trend of vaping over the last years, the trend is largely irrelevant once the addiction takes hold. It is not the same as a hairstyle or a fashion trend.

Kids who get into vaping early will have a tough time getting back out of it. Substance abuse and dependence are serious. It is important to talk early and often with your children about the many potential dangers of the world around them, and how to mitigate those pitfalls. Be open, be honest, and be straightforward. If everyone does their part, we can make sure that e-cigarettes are never seen on school grounds ever again.