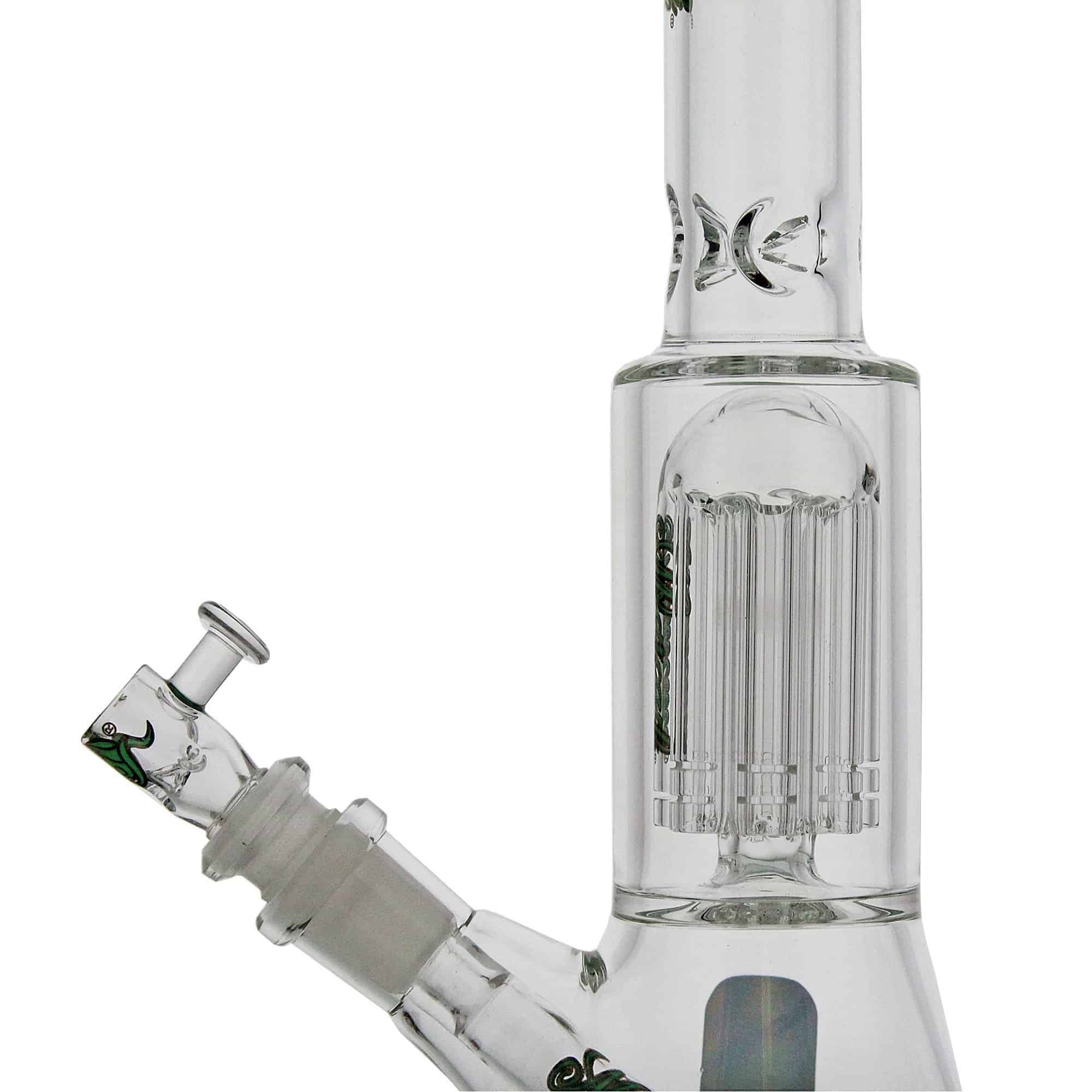 Understanding the Different Types of Percolators

If you love your cannabis like we do, you’ve probably already heard of percolator bongs. But you may not know exactly what they’re for, or what they do. And you may not be totally sold on the benefits of the percolator bong. What’s the difference between a basic glass bong or bubbler and a perc bong? Today is the day, because here we’re going to cover all of the reasons why percolators are so central to stoner culture. A bong works just fine without a percolator, but today they have become basically standard because they improve the experience so much. In this post, we’ll discuss what percolators on dab rigs are, how they work, the various types that you can use with a water pipe, and their benefits.

What is a Bong Percolator?

Most people use bongs because it helps the smoking process feel gentler and smoother. On the other hand, today there are so many concentrates on the market that you may be a flavor chaser who loves to dab. Either way, a percolator can advance your goals, because it maximizes filtration and cools the smoke. Percolator bongs are scientifically engineered to optimally filter and cool vapor or smoke through water by pushing it through a series of tiny holes. This maximizes contact between water and smoke, because it forces the vapor into many paths and holes. In the end, the smoke diffuses through the water gradually in little bubbles, not all at once. The product is a cooler, smoother, gentler hit which is cleaner, and more effectively filtered of combustion byproducts such as tars. Percolator bongs, also called perc bongs, typically feature at least one, but potentially more than one and even many internal percolators. Percolators come in a range of different shapes and types for different uses, and each has a slightly different effect.

All percolator bongs provide a smoother, more enjoyable smoking experience, because they offer an additional layer of filtration. However, each percolator achieves this goal in its own way, and adds a unique and important aesthetic element to each piece. These are the most common types of percolators. 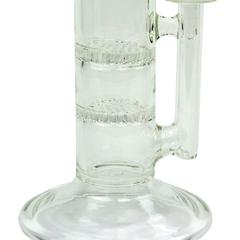 The HoneyComb percolator is among the best of the elite level bongs. These are extremely efficient perc bongs thanks to their shape, and may have up to 100 holes inside a honeycomb. This plus the flat honeycomb surface offers a really smooth experience, and these little discs don’t slow you down at all, fitting right inside the bong tube. Honeycomb discs are also easy to use in combination with other percs, or stack together. Another bonus: honeycomb percs are beautiful to look at, both themselves as they are structured, and the way they break smoke into millions of tiny little bubbles. The down side to honeycomb bongs is that you have to clean them regularly, but this small drawback is well worth the result. 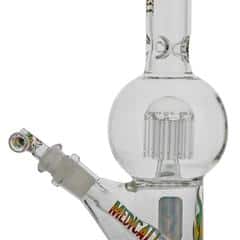 Tree percs typically have one to eight individual flow paths or arms, although they may have more than a dozen. Smaller models have a double tree with two or a triple arm tree perc with three. In general, more arms come with more intricate glasswork in a bong—meaning these high-end percolators can be very difficult to craft. Tree percolators are simple yet effective. In the bong’s tube, a series of rods or tree “branches” with several slits per branch hang under a canopy-like dome and run down into the chamber. Breaking down the smoke between these various paths along the arm tree and then pushing it through the many slits means you get plenty of diffusion. Among the first types of recyclers, tree perc bongs are difficult to clean and fragile, but reduce splash and offer drag-free, even diffusion.

A dome percolator has a small dome at the base of its chamber. Smoke passes over the dome and is diffused through a series of slits or small holes into the bong water. Dome percolators direct smoke with a large single dome into a separate column of water. Some designs feature triangular domes with holes or slits arranged in a variety of patterns.

The HoneyComb percolator is among the best of the elite level bongs. These are extremely efficient perc bongs thanks to their shape, and may have up to 100 holes inside a honeycomb. This plus the flat honeycomb surface offers a really smooth experience, and these little discs don’t slow you down at all, fitting right inside the bong tube. Honeycomb discs are also easy to use in combination with other percs, or stack together. Another bonus: honeycomb percs are beautiful to look at, both themselves as they are structured, and the way they break smoke into millions of tiny little bubbles. The down side to honeycomb bongs is that you have to clean them regularly, but this small drawback is well worth the result.

Among the most powerful percs, fritted disc percolators are similar to honeycombs, especially the stacked version. Fritted disc percs join together glass fragments with small spaces between them for smoke diffusion and percolation. With even more holes, they mean even smoother hits and more bubbles—but even more cleaning. 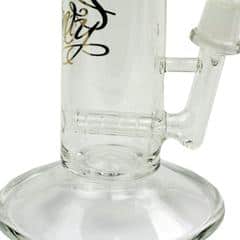 Inline percolators, often simple compliments to other percolators near them, are basic horizontal tubes with slits in them. More slits mean more percolation. Many types of perc bongs might have inline percs in them, but the common factor is the percolation happening right in the path of the smoke as it travels between the bong stem into the chamber. Even very simple tube bongs often include inline percs.

Showerhead percs look just like they sound, directing smoke through a tube and then into a disk-shaped pieces of glass with many holes, and finally into the main chamber. Showerhead percolators are a common and very popular choice because they are easy to clean and maintain, yet they offer plenty of power and durability. They may not be the coolest looking percs out there, but showerhead bongs get the job done.

Basically, matrix percolators are stacked or layered showerhead percolators in the middle of the bong with lots of space around them for effect. The many additional holes mean tons of bubbles, better filtration, and frankly a pretty dazzling look. However, matrix percs are seriously tough to clean. 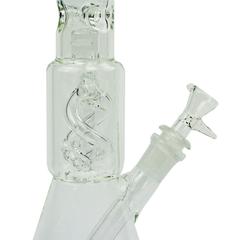 Also called a coil percolator, a spiral perc moves smoke through a coil to enhance its cooling effect and create a beautiful visual. Functioning much like tree percolators, the main difference with a spiral perc is the bent shape of the coil. Like ring percolators, spiral percolators provide longer, smoother drags than many other styles. 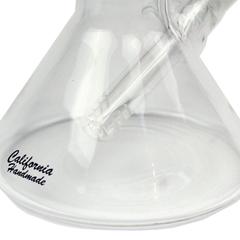 Turbine percolators deliver a cool aesthetic along with serious functionality. Instead of creating bubbles, the shape of the turbine percolator itself sends water up the sides of the pipe, directing it into an actual mini cyclone. This provides incredible visuals and effective filtration.

More basic looking than percolators, downstems are also far more basic in function. In fact, a downstem is the basic difference between dry pipes and water pipes: a tube that allows air into the main water chamber to create an improved airflow. A common water pipe feature, downstems can easily be removed and cleaned, and if needed, replaced—just be sure that the new downstem is the right size. They may not offer the smoothest experience, but they’re better than nothing.

Why use a bong with a percolator? If you’ve never tried one, but you’ve smoked cannabis, you may already know the best reason: smoke can be harsh. Percolator bongs cool down, filter, and moisturize your hits. Filtering smoke through water also removes some toxins and byproducts of combustion such as tar and ash. The end result is cooler smoke or even water vapor that delivers flavorful, potent hits. Still, if you’re not familiar with bongs, it may feel intimidating to try and figure out how these things work. They may seem to have more cultural and “druggy” stigma than just smoking marijuana for some users, and others worry that percolator bongs seem more potent than other tools. The bottom line, though, is these are just another way to smoke or vape cannabis or other herbs—and a smarter way, for that matter. It’s easier to tolerate cooler, more humid smoke—try it and you’ll see.