Typhon by Hydra Charging Case for Juul: Is it For You?

So, is there anyone out there that does not just love the idea of being able to charge your device as you go? I mean all devices, your cell phone, tablet, laptop and even your vape and e-cigarette. How cool is that idea?

Personally, I love the idea of not being tethered to an electrical outlet.

I was sent a Typhon charging case for Pax Juul (one of the most popular e-cigs in the world) by Hydra and I have to tell you that I like the design, with the exception of the size. The magnetic opening is sleek and smooth, which makes the almost seem space-age. The case allows room to place your Juul and an extra Juul pod.

On top of that, the very idea that the charging case opens and closes it pretty awesome because it keeps the Juul clean when it isn’t being used.

So, if you are a Juul user your biggest question is probably the obvious one: Does it work? Does the Typhon charging case for Pax Juul by Hydra charge the Juul?

Does it do it quickly?

Does it charge it quicker than just plugging the Juul into the USB port and skipping the case entirely? Not really, but then again, that is not what it’s meant to do. 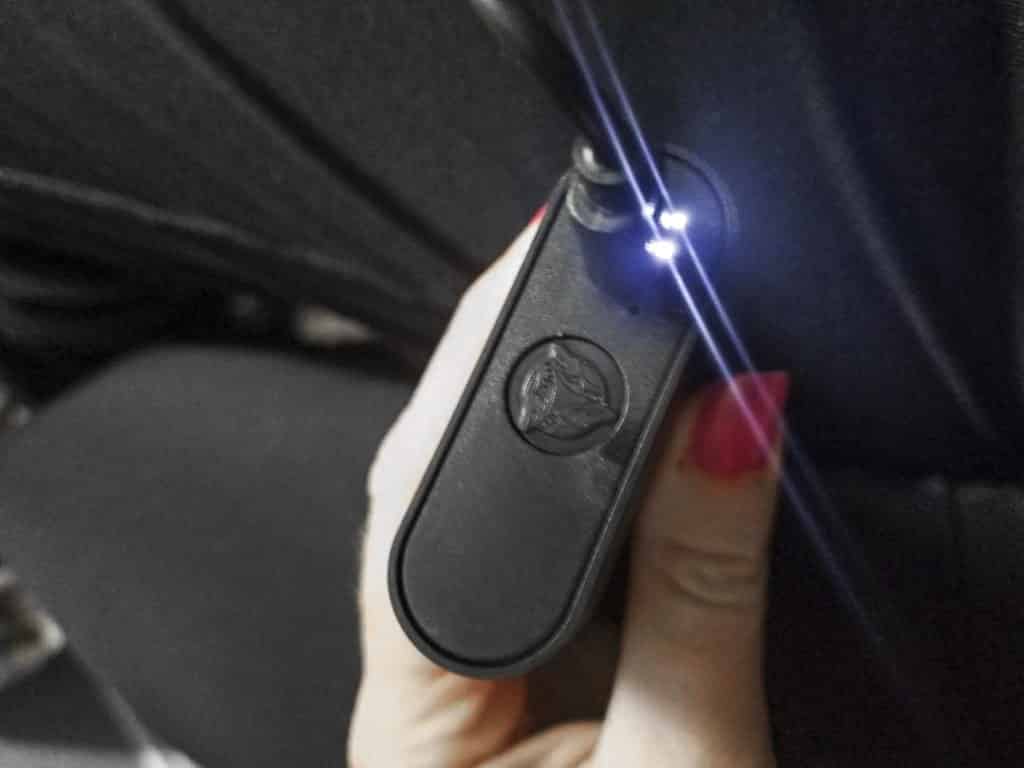 Plugging in this little device, it going to take about 45 to an hour to charge, which isn’t too bad all things considered. At least that’s what it was taking for me.

So, now you have a charged charging case (sounds a little funny there doesn’t it?) and you need to charge your Juul, so you pop the Juul into the charging case and you are off! You can have your Juul out with you, in your pocket or purse, charging away until you are ready to use it.

And how long does it take for the Typhon charging case for Pax Juul to charge the Juul? Roughly an hour.

So, say you need to go to an appointment and you know you have a commute to the appointment, the time of the appointment and other time that will be consumed with things that you won’t being using your Juul during. That would be a perfect opportunity to pop the Juul into the Typhon by Hydra charging case.

You don’t have to worry about plugging it into the USB in a hot car or anything like that.

And, check it out, you get about three full charges on the Juul before needing to charge the case again, or at least that was my experience.

I have only used portable chargers before for my cell phone and I haven’t been impressed. It seemed like I was always having to charge the dang charger and it was never ready when I needed to use it. To tell you the truth, I’ve used a couple different kinds, found both to be just a pain in the butt when it comes to my cell phone and I’ve scrapped using either.

If it’s more pain than gain, I can tell you that I’m just going to chuck it in the bucket and say screw it. That’s why I was pleased to find that I did not need to charge the Typhon charging case for Pax Juul all the time.

Now, earlier I mentioned that I was not a big fan of the size of this charger. Let me explain, it honestly would have been hard for Hydra to have made it any smaller, given the size of the Juul. My problem with the size comes from trying to carry the Typhon charging case by Hydra around.

When it comes to purses, I’m a big bag kind of girl, but that big bag usually has a decent amount of junk in it. And the Typhon charging case by Hydra was big and bulky in my purse.

Honestly, the Typhon charging case by Hydra is too big to be toting it around in your pocket, unless you have some really big jacket pockets or something. Overall, it’s not a bad size but it seems a whole lot bigger when you are trying to find a place to put it to make it a more mobile charging device.

Now, on to the every important issue of price.

The Typhon charging case by Hydra sells for $60 directly from the manufacturer. Now, as a vaper, if I was going to pay $60 for something, I am going to look at how much I am going to use this and how much a benefit this is going to be to me.

If you are someone who only uses a Juul periodically, or as a backup, then, while the Typhon charging case by Hydra is pretty awesome, it’s probably not worth your 60 bucks.

But, if you are someone who can’t live without your Juul, then I would say go for it. You get multiple charges to your Juul with only one charge on the Typhon by Hydra charging case, which to me adds up to a plus.

You get to carry and charge with you, so you are never without your Juul, again, another plus. If the Juul is your thing, then the Typhon by Hydra charging case should be your charger. Check it out, I don’t think you will be disappointed.

You can buy the Typhon by Hydra charging case directly from hydravaportech.com or from VaporDNA.