In a new viral video, a vape shop employee who appears to suffer from a severe undiagnosed mental illness is seen screaming at and physically hitting a customer who is wearing a Trump t-shirt.

The video begins calmly enough. A man is seen filming himself and says “Here we are at Xhale Vapor in Tucker, GA and I have just been asked to leave the store. He greeted me, and that was nice. I managed to find the item I wanted. And the next thing he said is that he wanted me to leave”.

The employee walks up and asks him to stop recording. At this point in the video it’s hard to tell who the asshole is, but it quickly becomes apparent. The employee immediately threatens to call the police on the Trump supporter, who replies saying “that would be awesome, we can call Fox 5, whoever you want. I would like to purchase something”.

After a further tense exchange, the vape shop employee goes off the rails and starts screaming “FUCK OFF. GET THE FUCK OUT”. He takes a swing at (well, more like feebly smacks) the man and runs around the store screaming expletives.

He continues to rant saying “Fuck off. I can’t stand ya’ll racist motherfuckers.” The employee and the man filming are both white.

The man says “Racist?”. The camera then pans to a black man who appears to be just as confused as the guy filming. The unidentified black man looks at the Trump supporter and shrugs his shoulders and seems to be sympathetic to the guy who just wanted to buy some vape juice.

The employee calls someone (presumably his boss) and says that he has a “racist motherfucker wearing some Trump bullshit. Got some racist bullshit all up in his head. I’m not serving anyone that has to do with that fucker.”

The man tries to reason with the ranting employee, saying “Sir I would just like to buy some of this Naked vape juice over here. I don’t have a problem with you.”

The employee begins screaming at the top of his lungs “LEAVE THE STORE! FUCK OFF! GET. THE. FUCK. OUT!” He then tries to swing at the man again.

The Trump supporter then becomes understandably frustrated and says “Go ahead and swing at me one more time. I’ll make a deal with you. Sell me that vape juice and I won’t call the police. What you did was you assaulted me. I want that for my wife. If you sell it to me I won’t call the fucking cops and press charges for assault. I won’t call corporate and get you fired. JUST SELL ME THE FUCKIN’ PRODUCT SO I CAN LEAVE!”

The employee then goes through the motions of “trying to find the product”. The Trump supporter has to point out the exact spot on the shelf where it’s located. The employee goes ahead with the sale while cursing repeatedly.

“God bless America. Capitalism wins again.” The man says as he takes out his wallet.

He then changes his mind and refuses to complete the sale while screaming more expletives.

The Trump supporter starts to lose his cool and begs the employee to ring him up, telling him that he won’t ruin his life if he just completes the sale. The employee still refused.

It ends with the man asking for a business card and telling the employee that he loves America and loves him too. The black guy in the store tells the Trump supporter “I’m so sorry you had to go through this”.

The video closes with the man telling the employee “He’s still your president. Go fuck yourself”.

We all hope that the employee can get the mental help he desperately needs.

“To our friends and customers,

Tonight, we had an employee act improperly toward a customer. Xhale City does not tolerate this kind of behavior from its employees. When we identified the employee at fault, we fired him immediately. We’ve also spoken to the customer and apologized. We value our clients and treat them with respect and dignity, regardless of their political views.”

Kudos on them for the way they handled this embarrassing situation. 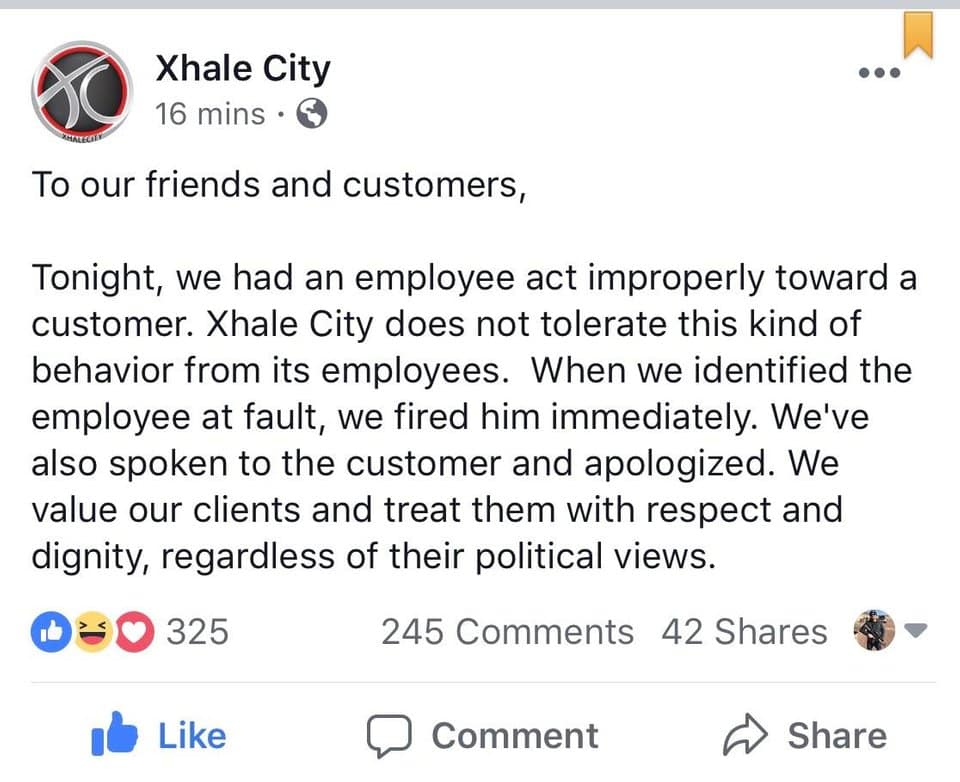