The proposed law that would include a 95% tax on vaping products and would ban any non-tobacco flavored e-juice would give Washington the distinction of having the strictest vaping laws in the country. So it was no surprise that when Governor Inslee did a Reddit AMA yesterday that he got absolutely destroyed by vaping supporters.

A large majority of the questions involved people asking about the bill and debunking his dubious claims of “protecting the children.” Read some of them below:

“Governor, Do you really think that driving adults back to smoking is the best way to keep children from vaping? Also your statment that “We have to face the reality that there’s a large industry dedicated to increasing nicotine addiction of our children.” Could not possibly be more incorrect when you are speaking about vaping. We as a commuinty do NOT want children vaping. What we want is for adults to have a safer alternative to smoking.

You have not adressed the fact that this tax will force many small shop out of bussiness, forcing their employees onto food stamps or other public help since they will no longer have jobs.”

“Governor Inslee. I smoked for over 50 years. 2-3 packs per day and thanks to vaping I am now cigarette free. I’m 68 years young and never felt better. My question is: Are you willing to force vaping business’s out of business because of your tax and deny other smokers the opportunity to find a viable way to stop smoking? I personally find this tax to be irresponsible and opressive, especially when the medical profession is starting to prove vaping is helping. see attached study recently released from Italy: http://www.biomedcentral.com/1741-7015/13/54”

Your proposed e-cig bill in WA state has been pitched as a bill to help the children. Can you explain the reasoning as to why only 10% goes to health services and the other 90% goes to the general budget?

A good number of people have pointed out that it seems as though the bill is more of a money grab than anything. What would your response be to those people?

Thank you in advance for the response.”

Despite the fact that a large amount of the questions revolved around this ridiculous bill, he only made one comment on the subject, which was probably one too many. His response would be fucking hilarious for how impossibly stupid it is if it didn’t come from an actual governor who has the power to potentially destroy this industry and the health of real people.

“I think I understand your concerns. This vaping issue is new for us. I understand there are a lot of concerns from a lot of different voices. You point out issues of fairness, equity and health. We’ve chosen to focus on children’s health to prevent an industry in succeeding in getting people to become addicted to nicotine. From your question, it sounds like you understand the dangers of nicotine addiction. We have to face the reality that there’s a large industry dedicated to increasing nicotine addiction of our children. In order to reduce prospects of children getting addicted to nicotine there are multiple tools like licensing of vendors and restricting childhood advertising. But the single most effective tool to prevent children from becoming addicted is the cost of the product. We believe what we’ve proposed will substantially reduce the chance of our children becoming addicted to this dangerous drug while still keeping vaping at half the price of cigarettes. Our bill includes provisions if vaping products are certified as smoking cessation products by the FDA. The bill isn’t done. I encourage you to keep talking to your legislators about this. But inaction on youth nicotine addiction isn’t acceptable.” 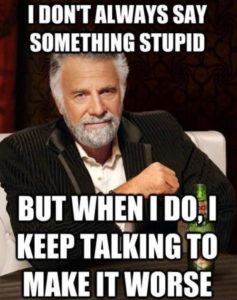 He succeeded in sounding like an out of touch old guy who has done exactly zero research on the matter and is just spouting vague nonsense. Unfortunately, resorting to using bullshit “protecting the children” talking points, which won’t fool anyone with more than a double-digit IQ, will undoubtedly appeal to the dumb soccer mom segment of the population who are susceptible to the influence of anyone who claims to want to protect their precious little snowflakes.

It seems like we can’t trust the people we’ve elected to make the right decisions for what’s best for the public’s health. The vaping industry is taking a significant dent out of the profits of both Big Tobacco and the pharmaceutical companies. With Big Tobacco lobbying the shit out of local and state governments it seems like they’ve decided that protecting the profits of these douchebags is even more important than protecting people’s health, because going back to smoking is exactly what most vapers will do if they can’t easily purchase vaping products.

Do you think the public outcry about this proposed tax will help defeat it, like what happened in Illinois? Let me know in the comments section.