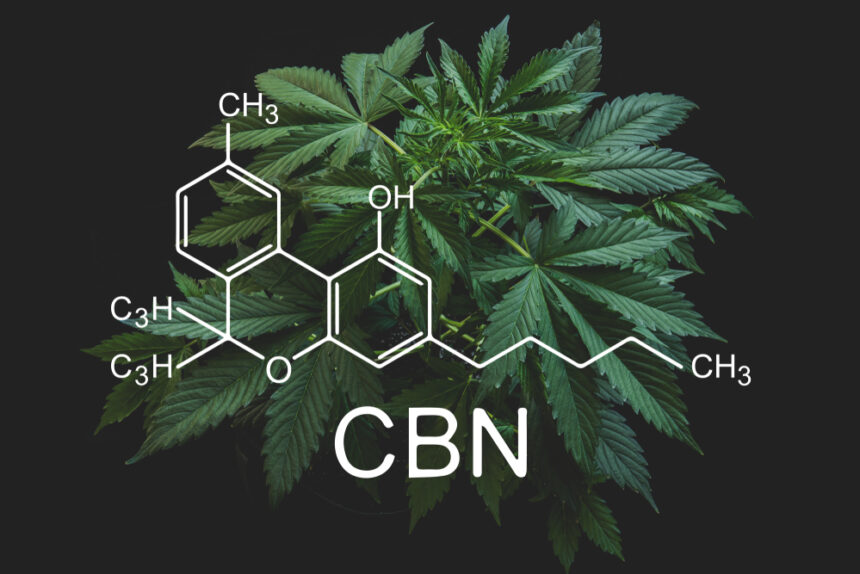 Did you ever forget your weed in some dark corner of a drawer and smoked it anyhow upon finding it after ages? If you did that, the weed did not make you high, did it? You likely slept like a baby instead after smoking your fill. That weed no longer contained tetrahydrocannabinol (THC), the cannabinoid that makes you high. It had long metamorphosed into cannabinol (CBN), the “sleeper” cannabinoid.

CBN is what THC breaks down into over a long time. If the hemp is exposed to sufficient heat, humidity, and oxygen, this degradation process occurs much faster. Unlike THC, however, CBN is only mildly intoxicating — just about a fourth of the potency of THC.

On the flip side, it’s a fantastic solution to insomnia!

And yet, very few companies have taken advantage of CBN in their products for sleep so far.

As CBD and Delta-8 THC continue to hog the limelight, only a handful of brands offer exclusive CBN products. Some use it in combination with cannabidiol (CBD) or Delta-8 to make oils, gummies, topicals, or other products.

So, what are companies waiting for?

The answer is research. As it is, research is lacking on cannabinoids in general. CBN is even behind CBD and THC in this regard. Whatever research has been done on CVN is on rodents. A study in 1975 showed that CBN boosts the sedative effects of THC in rats and mice. But is the sedative effect of old weed only due to CBN?

Old cannabis indeed contains more CBN. But, at the same time, the monoterpenoids of cannabis are also replaced by the sedating sesquiterpenoids as it grows older. So, it’s difficult to say for sure that CBN is solely responsible for the sedative effects of old weed, or, even if it is, to what extent.

How Does CBN Work?

It’s difficult to say at the moment because, as we said previously, research on the cannabinoid is lacking. Cannabinoids usually work with the body’s endocannabinoid system (ECS), via the CB1 and CB2 receptors, to help regulate a wide range of functions including sleep, mood, appetite, and more. These receptors interact with both the endocannabinoids that are produced in the body and the cannabinoids from cannabis plants.

We also know that CBD and THC can activate several biological pathways simultaneously. Apart from the CB1 and CB2 receptors, they may also produce a wider variety of effects through other channels. Since CBN comes from THC, it may work similarly in the human body.

There is no reason to undermine CBN as a byproduct of stale cannabis. CBN is indeed the result of THC degradation, but it has its share of medical benefits. Here are some of those:

As already said, CBN’s primary function is as a sedative. However, further research and human trials are needed to confirm this theory. A 1976 study suggested that CBN combined with THC was more sedating than THC alone. CBN itself was not sedative at all. But it produced more significant sedation when combined with THC. Thus, the combination of different cannabinoids may be more effective.

CBN is a potential painkiller, too. A study published in the Journal of Neuroscience in 2002 showed that THC and CBN could induce the release of calcitonin gene-related peptides from capsaicin-sensitive perivascular sensory nerves independent of the CB1/CB2 receptors. This action is unique to these two cannabinoids. Others usually work via the cannabinoid receptors in the human body.

A 2008 research says that all five major cannabinoids, including CBD, THC, cannabichromene (CBC), cannabigerol (CBG), and CBN, have the potential to fight a range of methicillin-resistant Staphylococcus aureus (MRSA) bacteria. So, CBN and other cannabinoids may be an answer to antibiotic-resistant bacteria.

Cannabinoids are known to be effective as anti-inflammatories. CBN may not be an exception. A 2009 study identified THC and CBN as possible inhibitors of inflammatory disorders such as allergic asthma. Cannabinoids have been proven to be beneficial in the treatment of multiple sclerosis, rheumatoid arthritis, colitis, and hepatitis because of their anti-inflammatory properties. Cannabinoids may also have the potential to treat certain types of cancers that are triggered by chronic inflammation.

Steep Hill Labs mentions that CBN can potentially even be used to treat glaucoma because it reduces intraocular pressure in the eye.

A study dating back to 1974 identified the combination of THC, CBD, and CBN as an effective anticonvulsant against electroshock and chemo-shock seizures. CBD and CBN alone showed no anti-convulsive properties though THC did. But together, they were more effective.

A 2012 study showed on rats that CBN may be an effective appetite stimulant, too. The rats that were given CBN showed a substantial increase in the quantity and the duration of feeding. Hence, CBN can be used as a non-intoxicating alternative to THC appetite stimulants.

Where Does CBN Come From?

CBN was discovered as far back as the late 1800s, and it was the first compound to be isolated from cannabis. In fact, CBN was thought to be the primary psychoactive component of cannabis for more than two decades.

In 1964, Israeli researchers Yechiel Gaoni and Raphael Mechoulam isolated THC and discovered its psychoactive supremacy in the cannabis plant. Further research identified CBN as a degraded version of THC.

A study conducted by the United Nations Office on Drugs and Crime (UNODC) in 1999 deduced that THC in cannabis dropped to half of its original potency after four years.

Moreover, THC changed to CBN as it oxidized and degenerated. The study also stated that maximum THC degeneration happened in the first two years of improper storage. So, basically, the longer you allow your stash to age, the more CBN it will contain.

In nature, CBN occurs in trace quantities in cannabis plants. And, very few companies are producing exclusive CBN products. So, you now know what to do if you want a taste of CBN. Just let your weed sit in a dry, dark corner of your cupboard. In a couple of years, if you still remember about it, most of the THC will have turned into CBN.

Another way to get CBN is to harvest hemp flowers in an overripe condition. So, if you grow your own weed or know someone who does, you can speed up the CBN-making process.

Where Can I Find CBN?

Isolated CBN products are hard to find. In fact, as we have already stated in our analysis, CBN in itself may not be as beneficial as it is in combination with THC or other cannabinoids. This is the “entourage effect” that you usually get from full-spectrum hemp.

Even cannabinoid commodities marketed as “CBN products” may not contain only CBN and have it in combination with other cannabinoids. That is why it is very important to read between the lines and check the ingredients list carefully.

If you are still interested in finding exclusive CBN stuff, it’s best to let your weed rest for months or years and then use it. You can smoke it or simmer your old weed in coconut oil until it is fully infused. It will take about five to seven hours. You can then take this CBN-infused oil in your food or drink.

Some strains are naturally high in CBN. These include Strawberry Haze, Jorge’s Diamonds, A-Dub, Amsterdam Flame, Death Star, Cataract Kush, Kosher Kush, Pineapple Chunk, Purple Sour Diesel, Red Dragon, and Shark Shock. If you happen to grow these strains or know a friend who does and will let you borrow some, you can let a few flowers ripen for about seven to ten days after the peak harvest time. Those flowers will be rich in CBN. If you let them lie on your shelf for months, the content will be even higher.

Some companies sell CBN isolates now. This is a versatile product, and you can ingest it through food and drinks or sprinkle it on your CBD or Delta-8 THC flower. You can also blend it into your topical or tincture.

How Do Companies Make CBN?

One of the various processes by which CBN naturally forms in hemp plants is decarboxylation. It is the process of heating the plant to convert the cannabinoid acids into their active form.

As hemp plants age, they start creating cannabinolic acid (CBNA). When the plant is heated to a low temperature, CBNA is converted to CBN. To create CBN oil, companies extract the CBN just like they extract any other cannabinoid and isolate it from the plant material and other compounds.

The CBN extract is then added to a carrier oil base to produce CBN oil.

CBN is not on the list of scheduled controlled substances in the US.

The 2018 Farm Bill states that any cannabinoid product that is derived from hemp and contains less than 0.3% Delta-9 THC is legal to be bought, sold, and used.

So, before you buy a CBN isolate or a product containing CBN with other cannabinoids, make sure to check the Delta-9 THC content. As long as it is less than 0.3%, you should have no problem acquiring it, possessing it, or consuming it. It is safe and legal.