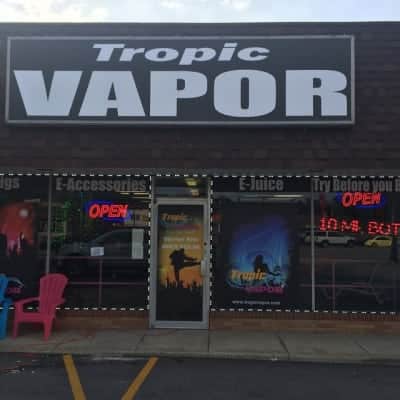 If, for some reason, you choose not to buy your vapes online, you most likely experience something similar to this when going to a vape shop:

You drive out to the shitty part of town, and pull up to some run-down, decrepit looking strip mall and park your car. You get out, lock the doors, and push past 4 or 5 bums begging for change before you finally get to the front door of the shop that is wedged in between an adult store and a Mexican taco shop that is always changing owners because the previous one was serving food infected with e-coli. Before you open the door with the worn-out blinking neon signs you panic because you can’t remember if you locked your door so you double-click the lock button on your keychain just to make sure.

When you get inside, some bro wearing a flat brimmed baseball cap with “vapelyfe” tattooed on his arms glances over at you from behind the counter with a look of annoyance, like you’re the biggest douchebag in the world for interrupting his important conversation with the other dude who also looks like he stepped out of an Ed Hardy commercial. When this “employee” finally decides that you aren’t going to go away, he begrudgingly makes conversation with you and tries to scam you into paying full price for an obvious clone that he claims is authentic.

WHY DOES IT HAVE TO BE THIS WAY!?

But now it’s devolved into a bunch of snooty weirdos hanging out in shit looking vape shops, playing Xbox and talking about “chucking tits”, pressuring old people who just want to quit smoking into buying overpriced mechanical mods with RDA’s instead of guiding them towards the more practical basic starter vape pens.

The reasons why vape shops are so shitty are as follows:

The employees are fucking retards

They act like elitist shitheads who will try to make you feel bad if you’re not vaping exactly the way they are. Even worse, half of the time they have no idea what they are talking about. This can have potentially serious consequences when it comes to safety. I once had a friend who was new to vaping who brought in a damaged battery to ask if it was still safe to use. The guy behind the counter told him it was fine. Of course, it later started a fire. That employee is still working there to this day.

The “regulars” are weird and act like they have Aspergers

Every time I go to a vape shop I see the exact same weirdos hanging out, trying to in engage me in awkward spergy vape conversations and blowing huge, obnoxious clouds in my face. Even worse, they’re usually buddies with the the employees, and sometimes insist on talking to them for half an hour about nonsense while a potential paying customer (me) is waiting.

There’s too much competition

Most people who started vape shops are idiots with no business sense. They saw that vaping was becoming popular and decided that this was their chance to quit McDonald’s and become rich. The only problem is that’s what every other idiot was thinking. The competition means that they have to cut costs any way they can, and one way is by operating their business out of a shithole.

Some vape shops are awesome though

If you’re someone who works at or owns one of the ~5% of vape shops that isn’t in a ghetto area, doesn’t have retarded employees, and isn’t a hang out for goofy looking weirdos in flat brimmed caps, then none of this applies to you. Unless you’re one of the ones that just copies the Apple Store design (minimalist with a few products on display). In which case you still suck, but at least you pretend to care with your lack of originality.

Do you own or work at a B&M vape shop? Tell me why you hate me below!