Why Bubblers are Awesome

Reasons for Using a Bubbler

If you are considering whether or not you want to buy a bubbler, you have come to the right place! Bubblers provide a convenient, reliable, and fun way to smoke. Not only that but they are often better than other methods of smoking. There are many reasons why it would be a wise and sound investment to make, so long as you make sure to clean it as often as possible.

The main reasons for using a bubbler boil down to the size, usability, effects, and power of a bubbler. Let’s dive into how each of these things matter:

Though Bubblers borrow their main idea of usage from bongs, they are much more convenient. Most of them have the ability to fit in your pocket or a small compartment allowing for easy transportation. Furthermore, it provides a much more laid back approach to smoking. It is better sized for kicking back on the couch and watching TV whereas a bong will demand more of your attention. You won’t even have to take your eyes off the television in order to take a hit from a bubbler!

Bubblers are the Best of Two Worlds

Providing you with a method of smoking that is roughly the size of a pipe with much of the functionality of a bong, bubblers are the best of both worlds! They provide a higher amount of smoke like you would find in a bong but a usability much more like a pipe. Though the amount of smoke provided is less than that of a bong, it is much more than a pipe, despite the fact that it has a lot of the same feel as a pipe.

Furthermore, a Bubbler will, much like a bong, come with a built in bowl and carbonator. This allows for convenience and increased effect. The built in bowl will provide a great place to to put your product and the carbonator will allow you to control the airflow to your bubbler. Overall, you will have much more convenience and control over your smoke!

This is great if you’re one of the people that enjoys the taste (and who doesn’t?) Bubblers actually require you to take slower hits since the water could come through the pipe if you try to rip it too hard. This means that you have to slow down and enjoy the taste. Sometimes you want to take a bigger hit and that is okay but, for times when you want a nice, chill smoke, bubblers are the way to go!

The increased level of smoke that will be produced from you Bubbler as opposed to your pipe will allow the effect of your product to be increased exponentially! A heavier amount of smoke means a better effect! Though your bubbler will not produce as much smoke as a bong, it will still produce much more than your pipe which will lead to a much better effect.

Furthermore, the smoke that is produced through the water of your bubbler will create a much less harsh feel. This means that you can handle more and that it will not feel too harsh on your lungs or throat. 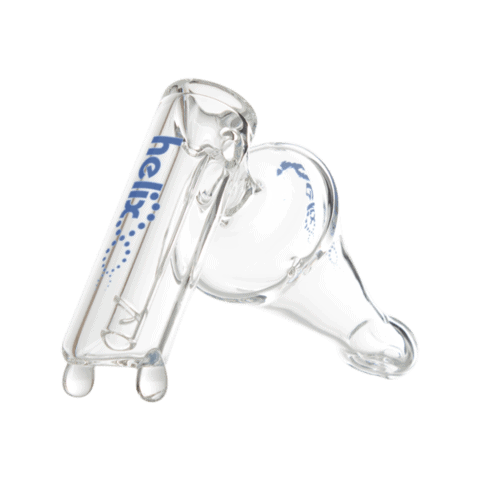 Bubblers come with a percolation system that you will not find in your pipes. This allows the water to diffuse and cleanse your product in the name of a healthier smoke! This leaves you with the pure smoke of your product as opposed to all of the other things that can be included in your smoke.

As with all products, the main thing is to continuously clean your bubbler. Ideally it should be cleaned after each use to allow for nice, clean hits for years to come. Realistically, just make sure you clean it out whenever you think about it. There are many types of bubblers so make sure you research the many different kinds before deciding.

Personally, I prefer the Grav Labs-6” Helix Bubbler. Currently on sale for an unbeatable price, this convenient and awesome looking bubbler will quickly become your number one method for smoking as soon as you receive it! Hits from it will be sure to be smooth and strong.  Find out if a bubbler is right for you by reading out bubbler vs bong comparison guide.